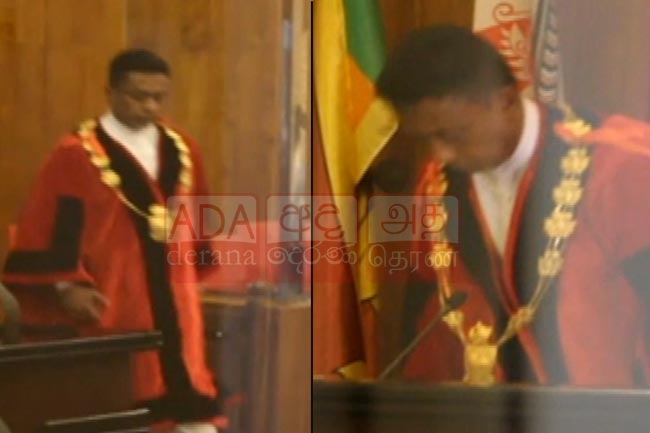 Kurunegala Mayor in attempt to claim lawyers fees of his case from Municipal Council?

Kurunegala Municipal Council members have left a council meeting expressing their displeasure over the Mayor’s failure to attend the meeting on time.

Reportedly, the Kurunegala Mayor had been attending an event inaugurating the newly appointed Minister of Highways Johnston Fernando while a council meeting had been convened today (13).

The Mayor had also made the welcome speech at the said function.

Subsequently, he arrived at the Kurunegala Municipal Council at around 12.10 pm following the conclusion of the function.

A member of the council proposed to postpone the meeting as many members had left the council by the time the Mayor arrived.

The mayor then adjourned the meeting, explaining the reason he had failed to arrive on time.

Meanwhile, Chairman of All Ceylon Farmers Federation Namal Karunaratne alleges that this meeting was convened to approve the payment of the lawyer’s fee of the Kurunegala Mayor’s case on the demolition of a part of the Buwanekaba Raja Sabha building in Kurunegala.

Karunaratne stated that there is an attempt to approve a sum of over Rs. 4.4 million to pay the lawyer’s fees in the case against the Mayor.