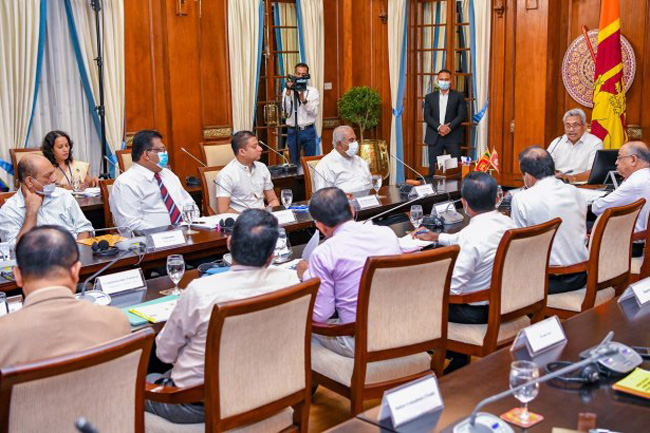 President Gotabaya Rajapaksa has advised the relevant authorities to revive the upliftment of public transportation service by creating a conducive environment for the passengers to travel with mental satisfaction as the initial step, says the President”s Media Divison (PMD).

“A small step will lead to a big change. Start cleaning buses and provide seating facilities to passengers from tomorrow itself,” President has directed.

Pointing out that the small step taken to stop using posters had enabled all cities in the country to be kept clean, President Rajapaksa noted that development in any sector can begin with a small initiative.

He made these remarks during a meeting to discuss future activities of the Ministry of Transport and the State Ministry of Vehicle Regulation, Bus Transport Services and Carriages and Automotive Industries held at the Presidential Secretariat on Tuesday (18).

President has reiterated the necessity of implementing the Park and Drive system in order to minimize traffic congestion. Although the Transport Board provides bus transportation as a service, it should be transformed into an entity that is not making losses, he emphasized. Both public and private transport sectors should pay attention to the bus service in rural areas.

“Start implementing the combined transport time table of trains and buses without delay. It is important to identify areas that need swift solutions to develop the transport sector. Long and short-term plans should be formulated for the next five years to develop the sector. It is imperative to review if the targets have been achieved,” President observed.

It was decided to repair railway carriages to provide a better service. Minister of Transport Gamini Lokuge said Colombo Fort and four other railway stations will be modernized as a pilot project.

The Minister said that by increasing the number of trains, more people will be able to travel by the Kelani Valley Railway Line.

State Minister Dilum Amunugama meanwhile pointed out the importance of exploring the potential benefits which can be gained through opening up the services of training and maintenance facilities belonging to the Transport Board to the private sector as well.

It was decided to introduce a pre-paid card system expeditiously for both public and private sectors for an efficient passenger transport service.

During this meeting, the steps that should be taken to make the Department of Motor Traffic an institution that is free of corruption and irregularities were discussed in detail.

The President drew attention to the possibility of allowing ordinary buses in good condition to operate on the expressway so that more passengers can travel paying low bus fares.