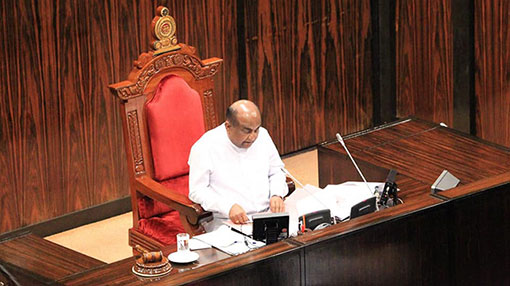 Speaker of Parliament Mahinda Yapa Abeywardena announced that the Government’s Policy Statement was passed without a vote.

Parliament was subsequently adjourned until 9.30 a.m. on August 27.

Parliament convened at 9.30 a.m. this morning (21) and the Government’s Policy Statement was taken up for debate.

The policy statement, which was presented by President Gotabaya Rajapaksa in Parliament yesterday (20), was taken up for debate as a motion presented by a Member. MP Nipuna Ranawaka had moved the motion.

Leader of the Opposition Sajith Premadasa also made a special statement in Parliament regarding unemployed graduates today (21) in accordance with Standing Order 27 (2).

Meanwhile the Committee of Selection was appointed today to serve during the First Session of the Ninth Parliament in accordance with the provisions of Standing Order 114 of Parliament.

The Select Committee is chaired by the Speaker Mahinda Yapa Abeywardena and consists of 12 Members of Parliament including the Leaders of Political Parties and their Representatives.

The first meeting of the Parliamentary Committee of Selection was held at 2.00 pm today (21) at Parliament Premises.

The party leaders who met yesterday (20) under the chairmanship of the new Speaker Mahinda Yapa Abeywardena decided to hold sittings of Parliament today (21) and on the 27th and 28th of August respectively.