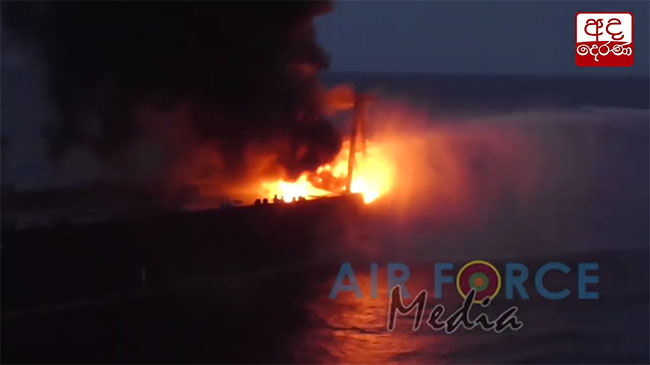 Fire continues to rage on oil tanker off Sri Lanka

One of the crew members is still missing as the fire continues to rage on the Panama-registered oil tanker carrying 270,000 tonnes of fuel off the southeastern coast of Sri Lanka.

Sri Lanka Navy, the Sri Lanka Coast Guard, the Sri Lanka Ports Authority, the Marine Environment Protection Authority and other stakeholders are taking steps to mitigate and manage the risk of possible oil spills in future due to this disaster.

The Navy said that responding immediately to a distress signal of an explosion of a boiler followed by fire erupted in the main engine room of “MT New Diamond”, an oil tanker sailing 38 nautical miles off Sangamankanda Point east of Sri Lanka, a group of emergency relief serving ships were promptly dispatched to the location for relief assistance today (03).

According to the distress signal received by the Maritime Rescue Coordinating Center in Colombo, the distressed oil tanker in eastern seas has been manned by 23 crew members including 05 Greek and 18 Philippine nationals and is registered under the Panamanian Flag (IMO-9191424).

Further, the tanker was transporting 270,000 metric tons of crude oil from the port of Mina Al Ahmadi in Kuwait to the Indian port of Paradip, when it faced with this unfortunate turn of events. It is also reported that 1700 metric tons of diesel required for the use of the tanker have been stored onboard.

Meanwhile, the Sri Lanka Navy Ship (SLNS) Ranarisi reached the distressed vessel and embarked an SLN rescue team aboard the oil tanker before retrieving the third engineering officer of the ship.

Subsequently, this Philippine national engineer with injuries was promptly brought ashore and he was afterwards rushed to the Kalmunai Hospital for treatment.

Further, 03 Greek and 16 Philippine crew members of the tanker in distress were rescued by another merchant vessel (MV Helen M) plying nearby and they are to be safely brought ashore by the Navy.

Besides, the captain and another member on the fire-erupted tanker have been safely rescued by SLNS Sayura. However, one Philippine national of the crew has not been located since the time of this unfortunate occurrence, the navy said.

Meanwhile, the Indian Coast Guard on Thursday said it has diverted three of its ships and a Dornier aircraft to assist the Sri Lankan Navy to douse the fire on board the oil tanker.
The Indian Coast Guard said it had diverted three of its ships – Shaurya, Sarang, Samudra Paheredar and a Dornier aircraft for firefighting operations.

The Indian Coast Guard Ship “Shaurya” has reached the location and started extinguishing the fire and to augment the relief providing and disaster mitigation while 01 Indian Coast Guard ship and 03 Indian Navy ships are also approaching the scene of the incident, SLN said.

Also, in accordance with the instructions given by the health sector in the current COVID-19 emergency situation, arrangements have been made to direct the rescued crew members to the shore for treatment and isolation following the proper health instructions.

Further, the Navy, the Sri Lanka Coast Guard, the Sri Lanka Ports Authority, the Marine Environment Protection Authority and other stakeholders are taking steps to mitigate and manage the risk of possible oil spills in future due to this disaster, it said.

“The Navy has been entrusted with the responsibility for maritime Search and Rescue (SAR) operations in Sri Lanka’s Search and Rescue Region. Remaining true to its mandate the Navy has responded to distress calls of this nature, made by ships and craft, on numerous occasions previously.”

The Marine Protection Authority has said it would take measures to prevent any possible oil leak from the tanker.