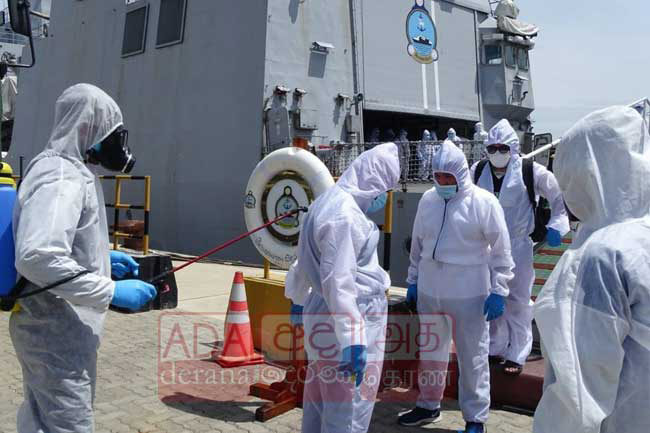 Sri Lanka Navy, Sri Lanka Air Force, Indian Navy, Indian Coast Guard and other stakeholders engaged in disaster management operation have managed to control the fire raging in the crude oil tanker MT New Diamond again, which was caused by the effects of the adverse weather.

A research team from the National Aquatic Resources Research and Development Agency (NARA), Marine Environment Protection Authority (MEPA) and University of Ruhuna have reached the site to inspect water samples, to determine if any damages were caused to the marine environment due to the disastrous situation.

The vessel is currently positioned 28 nautical miles away from the Sangamankanda Point, according to reports.

Due to the effects of extreme temperature and sparks onboard as well as the gusty winds, the fire onboard the vessel, which was already doused on Sunday (06), had reignited yesterday.

Meanwhile, MI 17 helicopter Sri Lanka Air Force has splashed a consignment of 3000kg of Dry Chemical Powder over the fire.

Meanwhile, 06 salvage operation experts as well as 11 disaster management professionals directed to the island by the company that acts as the commercial and technical operator of MT New Diamond, have arrived at the sea area where the distressed ship is located to support disaster management operations.

Accordingly, the Sri Lanka Navy and other disaster managing teams, following the expert advice, are working in full swing to contain the blaze that developed again.

There is no risk of the fire spreading to the oil storage or leaking oil from the ship into the sea as of now, the Navy has said.