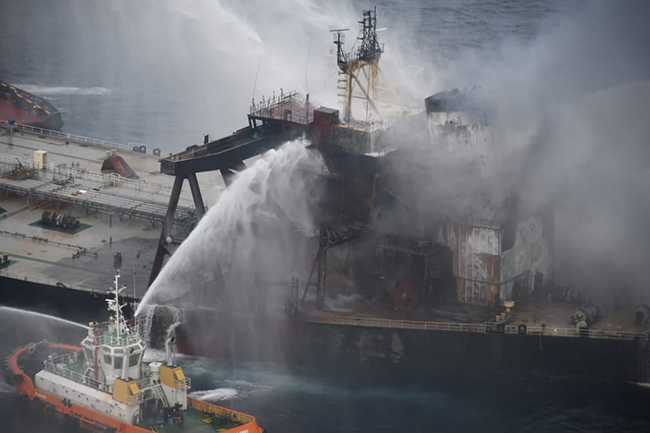 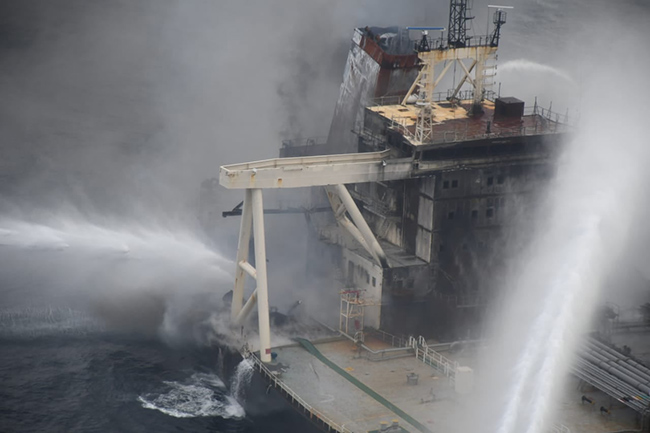 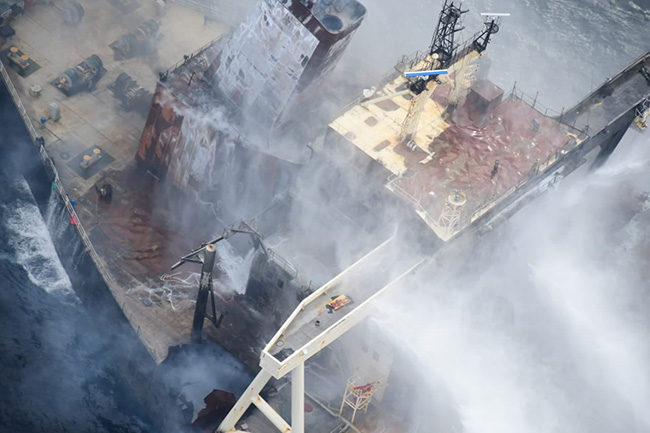 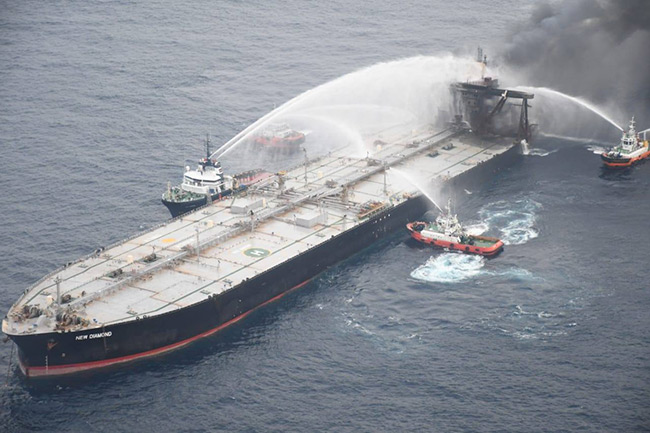 Sri Lanka Navy says the concerted efforts of the disaster management teams have successfully controlled the fire resulted by adverse weather onboard the MT New Diamond to a greater extent by now.

Meanwhile, the disaster management teams are making a lot of effort and continuing the mission ahead, using fire extinguishing agents and water.

In a recent development, a narrow diesel oil patch extending to 1km away from the ship has been observed, the Navy said in its latest update on the fire raging in the vessel.

Over the past few days, the firefighting teams continued to surge sheer volume of sea water to extinguish fire onboard. As a result, the engine room of the ship was flooded with sea water, making it lying in a position called ‘trim by aft’.

In this backdrop, it is believed that the diesel that had been stored in ruptured tanks close to the engine room had been mixed with flooded water and oozed out due to the ship’s changing position.

However, the crude oil storage of the distressed ship is still safe from the fire and there is no danger of the ship leaking oil into the sea at the moment.

Following this event, a Dornier aircraft of the Indian Coast Guard stationed at the Mattala Mainda Rajapaksa International Airport was flown to the area where the diesel fuel patch was observed this afternoon and a diesel dispersant was airdropped to the sea area to minimize its impact on the ocean.

This dispersant that was sprayed would change the chemical composition of the diesel mixed with sea water, thereby minimizing the potential impact on the marine environment.

Further, a research team made its way to the site of the fire-damaged ship this morning to collect sea water samples, to find out the impacts of fire on marine environment.

Upon collection of required samples, the team comprising officials from the National Aquatic Resources Research and Development Agency (NARA), Marine Environment Protection Authority (MEPA) and University of Ruhuna, are on their way back to continue with onward testing.

Further, a Marine Research platform of NARA also arrived on the site with a view to obtain more specifics to carry out further investigation.

In the meantime, the rescued 20 crew members (Filipino and Greek nationals) of MT New Diamond, whom were isolated safely onboard Sri Lanka Navy Ship Sindurala were transferred to the port of Hambantota today.

The Navy has also made arrangements to get them accommodated in an isolation centre and the crew members were subjected to PCR tests as well.

The distressed oil tanker is now lying about 30 nautical miles off Sangamankanda Point and the disaster management operation is still underway at its height.

The operation is augmented by ships, aircraft and tugs rushed to the scene by Sri Lanka Navy, Sri Lanka Air Force, Indian Navy, Indian Coast Guard and other stakeholders.

Moreover, aircraft have also been deployed for air reconnaissance operations to aid the ongoing mission. Remaining resolute in the face of unexpected developments, Sri Lanka Coast Guard and Fast Attack Craft from the 04th Fast Attack Flotilla, providing logistics support, are engaged in the mission further.

On the other hand, the coordinated operation is assisted by overseas salvage operation experts as well as disaster management professionals arrived in the island.