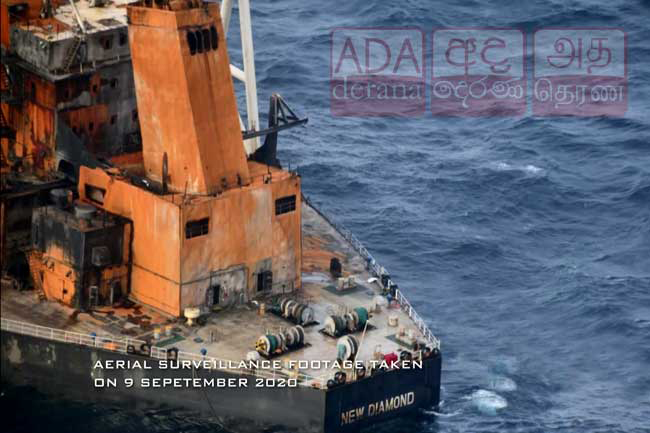 Three members of the international salvage company have boarded the oil tanker “MT New Diamond” which was caught on fire again following the initial dousing efforts, says the Navy Spokesperson.

The tanker MT New Diamond had been sailing 38 nautical miles off Sangamankanda Point east of Sri Lankan seas at around 8.30 am on the 3rd of August, when the unfortunate turn of events unfolded.

Joint operation to control the fire engulfing the oil tanker, caused by an explosion of a boiler in the main engine room, was launched responding to a distress signal received by the Navy.

According to the distress signal received by the Maritime Rescue Coordinating Center in Colombo, the oil tanker in eastern seas has been manned by 23 crew members including 05 Greek and 18 Philippine nationals and is registered under the Panamanian Flag (IMO-9191424).

Thereby, 22 of the crew members aboard the oil tanker were rescued, however, the preliminary information from the ship’s crew confirmed that a Filipino seaman on board had died in a boiler explosion.

The tanker was transporting 270,000 metric tons of crude oil from the port of Mina Al Ahmadi in Kuwait to the Indian port of Paradip when it faced with this unfortunate situation. It is also reported that 1,700 metric tons of diesel required for the use of the tanker have been stored onboard.

The owners of the crude oil tanker later handed over the vessel to an international salvage company.

At the intervention of the owner of the ship, 10 British and Dutch experts including rescue operation specialists, disaster evaluators and legal consultants arrived at the Mattala International Airport on Sunday (06).

The Sri Lanka Navy, Sri Lanka Air Force, Indian Navy, Indian Coast Guard and other stakeholders engaged in disaster management operation had managed to douse the flames which were reignited from the effects of extreme temperature and sparks onboard.