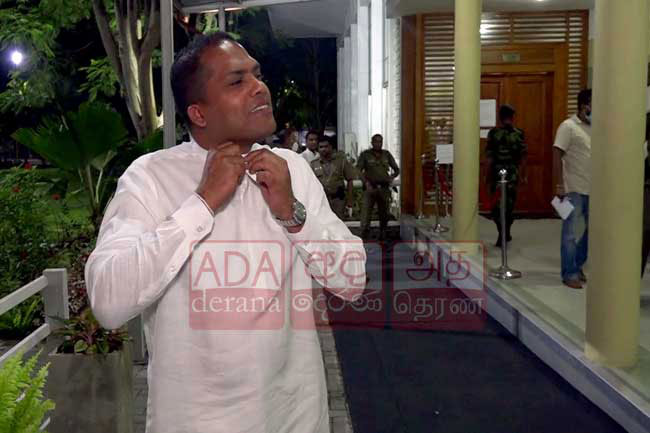 The Presidential Commission of Inquiry probing the 2019 Easter Sunday terror attacks warned MP Harin Fernando over the impulsive behavior displayed during his testimony at the commission.

The former Sports Minster appeared before the Commission yesterday (16), to testify regarding the statement he made to the media that his father had pre-warned him of the Easter attacks.

Testifying at the Commission, Fernando said that his sister had called him when the first series of attacks happened on Easter Sunday last year, and told him that they were planning to go to the church and the Kingsbury hotel, yet, their father had asked them not to, on the previous night.

Fernando said, after relaying this information to then-Prime Minister Ranil Wickremesinghe, he visited his father who was receiving medical care at an Intensive Care Unit in Colombo to ask how he knew about the attacks. However, his father only replied to him with ‘I know a lot more than you’, said Fernando.

Witness Harin Fernando said that he suspects that an official of the Criminal Investigation Department (CID) may have warned his father of the attacks.

The Senior State Counsel, then making submissions at the Commission, stated that it has been revealed that Harin Fernando’s father had engaged in a 356-second long phone conversation with Sergeant Nandalal, attached to the CID, on the day before last year’s Easter Sunday.

The Senior State Counsel further pointed out that this is the same Sergeant Nandalal who was a part of the CID team that visited Pasikudah to arrest Zahran Hashim’s team member ‘Army Mohideen’ and to recover the explosives in Wanathawilluwa. He is also the person whose photograph was found among the contacts in the phone of the said ‘Army Mohideen’, the State Counsel added.

Speaking further, Witness Fernando told the Commission that his father had never directly warned him against going to churches and that he had only revealed to the media what his sister had told him.

Fernando alleged that, his statement –”My father is currently in the hospital. He called me last night asking me not to visit a church saying he had a tip-off. There is intelligence information. My father told me not to go to Kochchikade Church.” –, made to the media, was misused by the media to slander him politically.

The Appeal Court Judge on the Commission then questioned the MP whether the media had published anything he did not say, to which the MP replied in the negative.

However, the MP added that he had held a 45-minute press conference but the media had only used the part where he tells his father warned him of the attacks.

The Commission member then told Fernando that even if he held a 45-minute press conference, the media can only use the ‘hottest minute’ to broadcast.

Parliamentarian also said that he was greatly inconvenienced by the Cardinal’s statement ‘Our people died, Minister’s son survived’.

He further said that he does not believe that the church was not aware of the attacks in a context where many parties were pre-warned of it.

Fernando went on to say that a special investigation must be carried out to determine whether the Cardinal was aware of the attacks, because he did not hold a morning service on last year’s Easter Sunday, when the leader of the Catholic Church Council traditionally holds a morning mass on every Easter Sunday.

The President’s Counsel representing the Cardinal inquired the MP Fernando whether if he would accept it if he says that the Cardinal, as usual, conducted the midnight service at the St. Lucia’s Cathedral in Kotahena on April 20th last year, stating that the Archbishop holds the Easter service every year at midnight on the Saturday before Easter Sunday.

To which Fernando said that he was unaware of this and admitted that the above statement was made without any evidence and just because it came to his mind.

Thereafter, the President’s Counsel inquired Fernando about a nephew of the MP who is currently studying at a Catholic private school in Colombo.

He informed the Commission that the nephew in question is member of the school’s rugby team and that the team had made plans to practice at the Sugathadasa Stadium and visit the Kochchikade St. Anthony’s Church afterwards on Easter Sunday last year.

However, the President’s Counsel pointed out that, the MP’s nephew was the only person who did not attend practices that day.