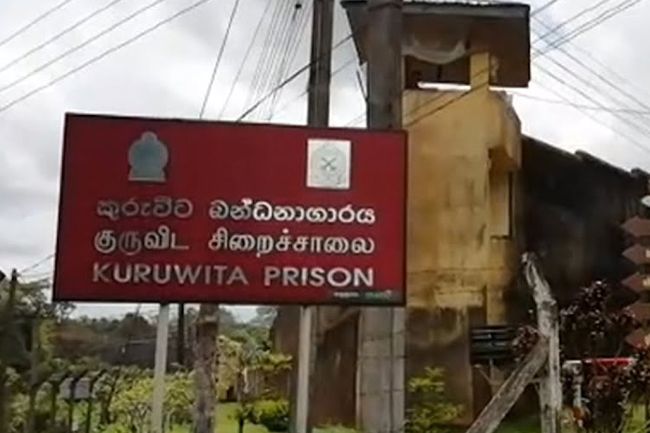 A prison sergeant has allegedly orchestrated a plot to assassinate the superintendent of Kuruwita Prison, the Police told the court.

The officers of Kuruwita Police, presenting their submissions to the Ratnapura Chief Magistrate, informed that a special investigation will be launched in this regard.

The prison sergeant in question has reportedly hired a criminal gang member who is currently serving a sentence at the Colombo Remand Prison to carry out the assassination.

According to the Police, this prison sergeant was recently transferred from Kuruwita Prison to the Pallekele Prison for his alleged involvement with drug dealers and underworld figures.

The Police told the court that the prison sergeant had been removed from the internal service while he was on duty at the Kuruwita Prison and was later assigned to outdoor duty. He had since been infuriated with the prison superintendent for impeding his misconducts inside the prison, the Police said further.

Information obtained by the police revealed the suspect had hired an underworld figure Thilanga Rohitha Ramanayake who operates under the alias “Ramanayake Sudda” to execute the assassination plan using two of his associates named “Sampath” and “Dinesh”.

Accordingly, the Kuruwita Police officers have recorded a statement from “Ramanayake Sudda” on Friday (18).

Commissioner (Administration) of the Department of Prisons Chandana Ekanayake meanwhile stated that a senior prison superintendent was appointed to probe the incident and submit a report within three days.