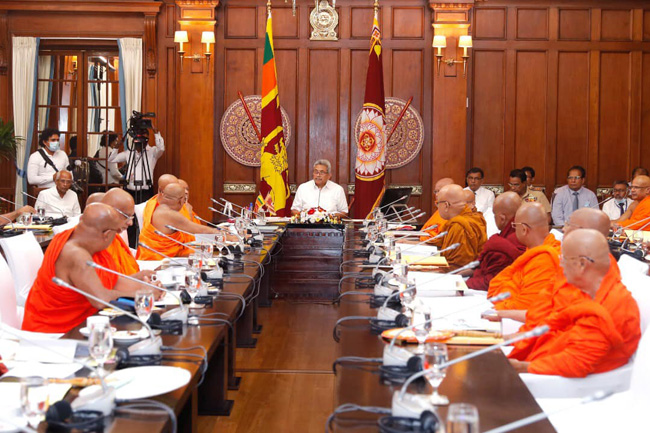 Member Theros of the Council are confident that the policies being followed by the President will be instrumental in building a fair and virtuous society.

Five months ago, President Rajapaksa decided to set up the Buddhist Advisory Council to seek the advice and views of MahaSangha in the process of implementing policies of the Government, the PMD said in a statement.

The first meeting between Maha Sangha and the President took place on the 24th of April at the Presidential Secretariat. During the meeting, the President had apprised Theros of the measures taken to prevent the spread of the COVID-19 pandemic and the future activities of the Government. President informed that he intends to meet the Council on the third Friday of every month and invited Theros of the three Chapters to participate.

Member Theros of the Council presented their advice and suggestions to implement strategies pertaining to several areas included in the “Vistas of Prosperity and Splendor” national policy statement during the previous 5 sessions.

The Buddhist Advisory Council which met for the 6th time at the Presidential Secretariat yesterday (18) reviewed the progress of the implementation of proposals so far.

The Council has praised the President for taking measures to lay a strong and viable foundation for the future of Ministry of Education by appointing 4 State Ministers for the first time in history.

The MahaSangha pointed out that the decision to amend the Antiquities Ordinance to address the long-standing issues related to Viharas built on archaeological sites has been welcomed by many.

While highlighting the importance of the Advisory Council which meets once a month, President Rajapaksa said that it had helped him as well as the officials to gain a better perspective of various fields. President assured to take steps to rectify prevailing shortcomings, the statement read further.

Maha Sangha representing the Buddhist Advisory Council, Principal Advisor to the President Lalith Weeratunga, Ministry Secretaries and heads of several institutes were present at the meeting.