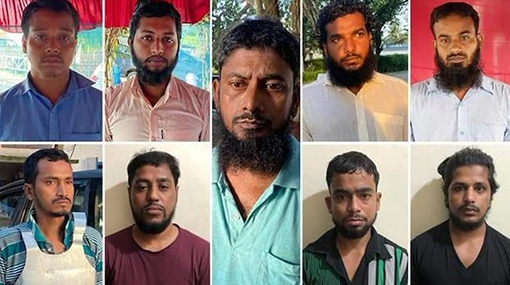 The National Investigation Agency (NIA) of India Saturday arrested nine suspected Al Qaeda operatives for allegedly planning a terror strike in various parts of the country at the behest of handlers from Pakistan.

The agency swooped down on the group operating out of Murshidabad in West Bengal and Ernakulam in Kerala in an early morning raid and has recovered country-made pistols, a rudimentary body armour, batteries, switches and firecrackers, literature on home-made IEDs and other “incriminating material”.

Sources said the raids were carried out based on intelligence inputs which suggested the group was in preparation for an attack. The members had been kept under surveillance for the past few months.

“NIA had learnt about an inter-state module of Al-Qaeda operatives at various locations in India including West-Bengal and Kerala. The group was planning to undertake terrorist attacks at vital installations in India with an aim to kill innocent people and strike terror in their minds,” NIA said in a statement.

After receiving inputs, the agency registered an FIR on September 11 and arrested the accused on Saturday.

An NIA source said the group was led by one Murshid Hassan, a casual labourer from Ernakulam in Kerala and all the individuals in the group were in their 20s, “connected” and originally hailed from West Bengal.

Barring two, all the accused are either daily wage labourers or low wage earners. One of the accused is a computer science graduate while another is pursuing graduation in Arts.

An official said the accused had to be arrested as they had recently procured batteries, switches, wires and fire crackers that could be used to make a bomb. “They planned to use potassium chlorate gleaned from the crackers as explosive in the bomb,” the official said.

He added that the group had procured some firearms from Delhi, which they were supposed to deliver in Kashmir on the directions of their Pakistan handlers. However, they had not yet been told who or which group in Kashmir would receive them.

“As per preliminary investigation, these individuals were radicalised by Pakistan-based Al-Qaeda terrorists on social media and were motivated to undertake attacks at multiple places, including the National Capital Region (NCR). For this purpose, the module was actively indulging in fund raising and a few members of gang were planning to travel to New Delhi to procure arms and ammunition. These arrests have pre-empted possible terrorist attacks in various parts of the country,” the NIA said.

The arrested accused will be produced before the concerned courts in Kerala and West Bengal for police custody and further investigation, the NIA said.

According to NIA, Iyakub Biswas is a salesman at a garment shop in Ernakulam, while Mosaraf Hossen is a cook (parantha maker) in the city.

NIA said Abu Sufian, who worked as a tailor in Murshidabad, is currently engaged in farming. Leu Yean Ahmed, photographed wearing a body armour in the picture, is an electrician in a college.

Mainul Mondal is a cook, while Al Mamun is a mason also doubling up as a driver.

The two educated men among the accused are Ataur Rahman and Najmus Sakib. While the former is a second-year arts student in a Murshidabad college, the latter is pursuing graduation in computer science there, NIA claimed.