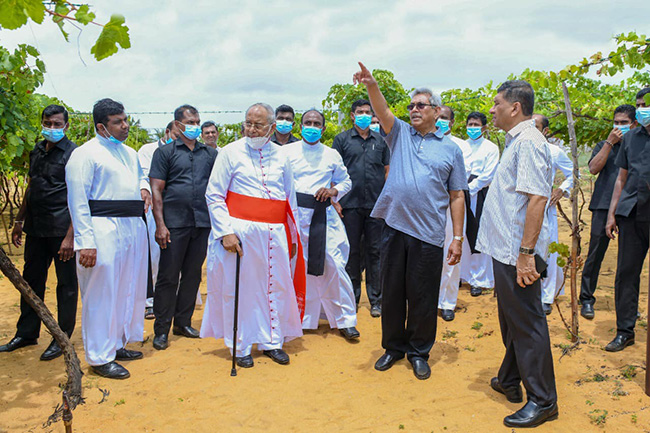 President Gotabaya Rajapaksa visited Puttalam district today (19) to inspect some of the development projects in the area, says the President’s Media Division (PMD).

Commencing the tour President Rajapaksa has inspected the activities in Palachchonai Estate in Madurankuliya. Coconut, vegetables and several other agricultural crops are cultivated in the 900-acre estate, says the PMD. President has appreciated the successful model cultivation of grapes in 10 acres of land.

President has then declared open the agro-technical institute constructed with funds received by His Eminence Malcolm Cardinal Ranjith from the Government of Italy. The institute has been designed to provide residential practical training to 50 students. The Cardinal said more opportunities will be given to the youth from low-income families in the area.

The institute will operate under the supervision of the Archbishop House in Colombo. President engaged in a cordial discussion with the Rector of the training institute, the PMD added.

During the visit to Model School in Madurankuliya, the President has spent some time speaking to the students. Heeding to their requests to construct the playground in the school, President has instructed the Commander of the Army to expedite the construction work.

President informed the Secretary to the Ministry of Highways to construct a flyover connecting the Primary School on the other side of the road. President has given immediate solutions to several public issues including transport problems, the PMD said further.

Further, the President exchanged pleasantries with the people on his way to Daluwa from Madurankuliya.