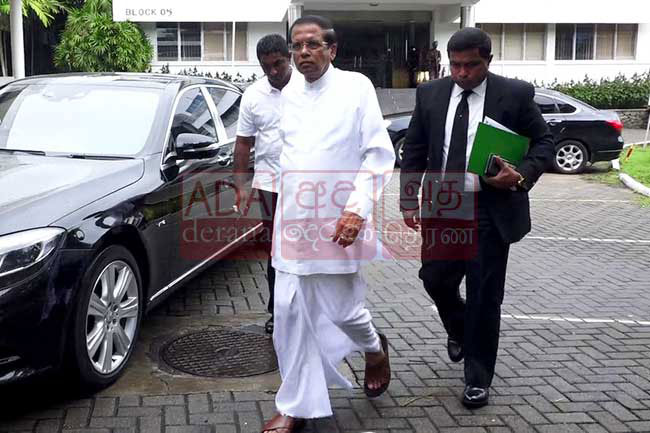 Maithripala arrives at PCoI on Easter attacks as an observer

He arrived earlier this morning (22), as an observer to listen to the evidence of other respondents being heard at the Commission.

He was present at the Commission premises for nearly three hours.

He as arrived as an observer to listen to the evidence given by other respondents, stated Ada Derana reporter.

Meanwhile, the statement issued by the former President discrediting former Defense Secretary Hemasiri Fernando’s testimony at the Commission was discussed at the Presidential Commission yesterday (21).

The former President’s personal secretary, in a letter issued on Sunday (20), has alleged that the former Defense Secretary Fernando has been maliciously lying before the Commission.

The attorney representing the former Defense Secretary stated that an external party discrediting an ongoing testimony, when the opportunity has been given for cross examination, tarnishes the authority and the honor of the Commission.

Therefore, the attorney urged the Commission to take appropriate action under contempt of court as a judicial matter has been criticized by an outside party.

When inquired on the matter, the attorney representing former President Sirisena told the Commission that he was unaware of such a statement and that his client had not informed him with regard to such a letter.

Further, he sought permission to make submissions with regard to the incident before the Commission tomorrow (22) and requested for a copy of the relevant press release as well.

Considering the request, the Presidential Commission directed the lawyer representing the former President to appear before the Commission tomorrow regarding the incident.