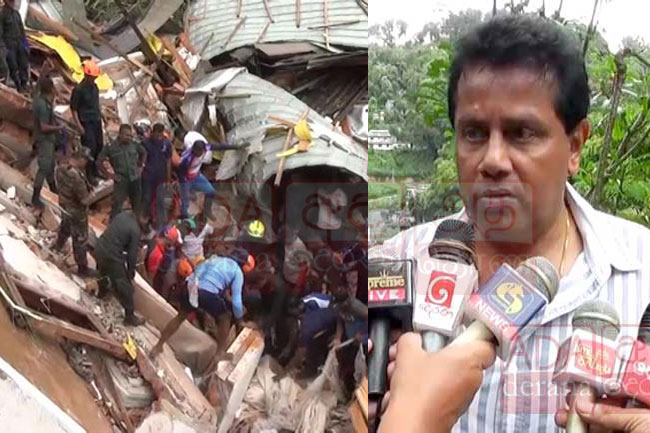 The State Engineering Corporation (SEC) has rejected the statement issued by the owner of the collapsed building in Kandy that the SEC had approved the construction of the said building.

A five-story building on the Sanghamitta Mawatha in Buwelikada, Kandy collapsed onto a nearby house Sunday morning (20), and a family of three – father, mother, and one and half month old infant – was killed in the incident.

Their bodies were handed over to the relatives last night (21), following the post mortem at the Kandy Hospital.

Broad investigations by the National Building Research Organization (NBRO) and the Police were launched into the incident.

The owner of the collapsed building, former Basnayake Nilame of Dodanwala Natha Dewalaya Anura Lewke, claimed that the house was built to a proper standard with proper legal authorization from the SEC.

However, the SEC rejects the claims that the SEC granted approval for the construction of the house, the General Manager of SEC, D. T. Rajasekaran, said.

Upon inspection geologists from the NBRO stated that the condition of the land had not been taken into consideration when constructing the five-story house.

A five-member investigation team has been appointed to probe the incident and it is to obtain relevant documents from all the institutions that are said to have given the approval to construct the building.

Meanwhile, if the owner of the house is found to have built the house illegally, he would be charged with the negligent killing of three persons and damaging property, SSP Sudath Masinghe in charge of the Kandy Division told Ada Derana.