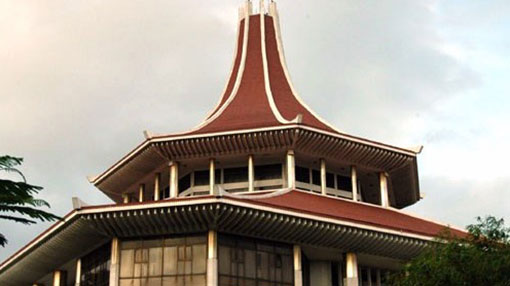 Petition filed with Supreme Court against 20A

A special application has been filed before the Supreme Court, challenging the draft bill of the 20th Amendment to the Constitution.

The petition filed by a lawyer seeks a court decision declaring that the 20th amendment draft bill, which has been presented to the parliament by the government, requires a public referendum to be passed as it violates fundamental rights.

The application alleges that the proposed 20th Amendment to the Constitution curtails a number of fundamental rights and other provisions guaranteed by the Constitution.

The petitioning party charges that the proposed 20th Amendment contains that are severely prejudicial towards the public such as the removal of the provisions allowing for filing of fundamental rights (FR) petitions against the President, curtailing the powers vested with the Elections Commission to file legal action against violation of directives issued by the commission, the preventing of the Presidential Secretariat, the Prime Minister’s Office and state institutions from being audited and removing the restrictions placed preventing a person with dual citizenship from contesting general elections or presidential election.

The petition further states that the proposed amendment seeks to reintroduce the provisions allowing the presenting of emergency bills, which had been done away through the 19th Amendment.

It also states that the proposed constitutional amendment abolishes the power vested with the Bribery Commission to investigate an incident of bribery or corruption without a prior complaint and that it also removes the qualifications required to be appointed as the Auditor General.

The petitioner states that the proposed constitutional amendment violates the fundamental rights guaranteed by the constitution as well as other paragraphs and therefore requests the Supreme Court to deliver a verdict declaring the draft bill will require two-thirds majority in parliament and a public referendum to be passed.