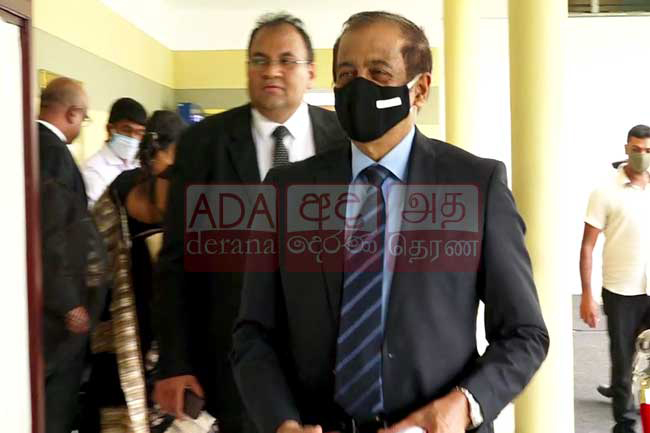 He made this accusation while giving evidence before the Presidential Commission of Inquiry (PCoI) probing the Easter Sunday carnage, for the 5th day on Monday (22).

During the testimony, the Additional Solicitor General of the Government asked the witness as to when the rift between him and the former President began.

Fernando replied that the rift unfolded in around January and that it escalated as various individuals made up lies about him to the former President.

Subsequently, the Additional Solicitor General asked the witness whether he presided over the intelligence coordination meeting which was scheduled for the 16th of April 2019 and he responded in the negative. The Chief of the Defence Staff, the commanders of the Tri-forces and many other officials had requested for leave because of the Sinhala and Hindu New Year season. Hence, the scheduled meeting was not held. Besides, conducting the intelligence coordination meetings on Tuesdays was not mandatory. There were times when these meetings came to an end just within 5 minutes and then there were times when meetings did not take place at all.

The Additional Solicitor General then asked the witness, Would you agree if I suggest that you did not perform your duties properly?

The witness, dismissing the claim, stated that the SIS failed to provide proper intelligence information. Nilantha did not bring up the forewarning even during the last intelligence coordination meeting held in the days leading up to the Easter Sunday attacks. Leading the investigations into Zahran was assigned to him. So, he is the person who should inform us about it. As far as I know, the former President had, in writing, handed over the probes into Zahran to Nilantha.

The retired Appeals Court judge in the PCoI panel asked the witness if he can prove that the former President had assigned the relevant investigations to Nilantha Jayawardena.

Responding in the affirmative, he said: Yes, I can prove it. I was told about this incident by former National Intelligence Chief Sisira Mendis because I was not serving as the Defence Secretary back then. During an intelligence coordination meeting which took place in 2018, the former President has told then-IGP Pujith Jayasundara to withdraw himself from the investigations into Zahran and the NTJ and to hand it over to Nilantha Jayawardena instead. Thereafter, Nilantha Jayawardena was the one leading all investigations pertaining to Zahran.

The retired Appeals Court judge then asked Fernando whether the intelligence services in the country were under political influences.

The witness then responded, Any state intelligence service in the world, to a certain extent, is involved in politics, and it is the same in our country, for about 25 per cent. However, following the 52-day constitutional crisis, the State Intelligence Service was entirely engaged in political activities. They were mainly involved in digging up information about the Opposition members that were crucial for the survival of the ruling party. And these pieces of information were directly reported to the then-President. As then-Defence Secretary, even I was not aware of them.