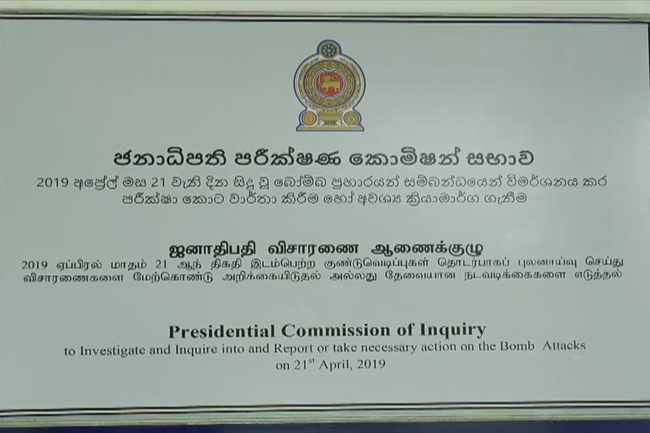 UPDATE: The Presidential Commission of Inquiry (PCoI) probing the Easter Sunday terror attacks has issued notices to former President Maithripala Sirisena, his personal secretary and the three Auxiliary Bishops of Colombo to appear before the panel tomorrow morning (24).

The personal secretary and the three Auxiliary Bishops were initially issued notices to testify before the PCoI at 2pm today (23) while the former President was notified to give evidence on October 05.

The Presidential Commission of Inquiry (PCoI) probing the Easter Sunday massacre has issued notices on the personal secretary of former President Maithripala Sirisena and the three Auxiliary Bishops of Colombo.

Accordingly, they are slated to appear before the Commission at 2pm today (23).

This is with regard to the media releases issued by them on the testimonies made at the Presidential Commission.

The former President’s personal secretary, in a letter issued on Sunday (20), has alleged that the former Defense Secretary Hemasiri Fernando has been maliciously lying before the Commission.

In the meantime, the three Auxiliary Bishops of Colombo had released a statement dismissing the controversial testimony made by Samagi Jana Balawegaya (SJB) MP Harin Fernando that His Eminence Malcolm Cardinal Ranjith could have been aware of the Easter attacks beforehand.

The attorney representing Sirisena, President’s Counsel Maithri Gunaratne yesterday (22) presented submissions on the matter to the PCoI on Easter attacks.

Stressing that any individual has the right to speak up against false statements, he pointed out that his client’s media release on former Defence Secretary’s testimony is partially similar to that of the Colombo Archdiocese on Samagi Jana Balawegaya (SJB) MP Harin Fernando’s statement.

The attorney representing His Eminence Malcolm Cardinal Ranjith then told the PCoI that the Colombo Archdiocese issued their media release to prevent the Catholic community from being misled by the parliamentarian’s statement.

The former President’s attorney had pointed out that his client issued his media release with a similar intention, since his supporters could be misled by Fernando’s statement.

The former Defense Secretary’s attorney had meanwhile noted that an external party discrediting an ongoing testimony, when the opportunity has been given for cross-examination, tarnishes the authority and the honour of the Commission.