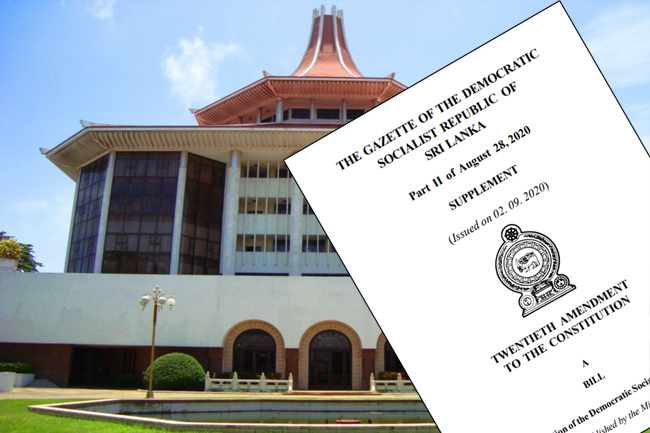 Four more petitions have been filed with the Supreme Court, challenging the draft bill of the 20th Amendment to the Constitution.

The TNA leader, in his petition, claims that certain clauses of the draft bill of the 20th Amendment proposed by the Government are contrary to the current Constitution, stressing that it violates fundamental rights and other provisions guaranteed by the Constitution.

MP Sampanthan seeks the Supreme Court to deliver a verdict mandating a two-thirds majority of the Parliament and referendum to pass the draft bill.

The Attorney General has been named as its respondent.

Accordingly, six petitions in total have been placed against the draft bill thus far.

Attorney-at-Law Indika Gallage through Attorney-at-Law Dharshana Weraduwage had lodged a special application on September 22, claiming that the draft bill requires a public referendum to be passed as it violates basic rights.

Samagi Jana Balawegaya (SJB) put forward the 2nd petition, citing the Attorney General as its respondent. They alleged that certain clauses of the 20th Amendment bill proposed by the government violate a number of fundamental rights and other provisions guaranteed by the current Constitution.

The draft bill of the 20th Amendment to the Constitution was tabled at the Parliament on Tuesday (September 22), amidst the protests of the Opposition.

The Cabinet of Ministers granted its approval to the draft bill of the 20th Amendment on the 2nd of September and its extraordinary gazette notification was published the following day.