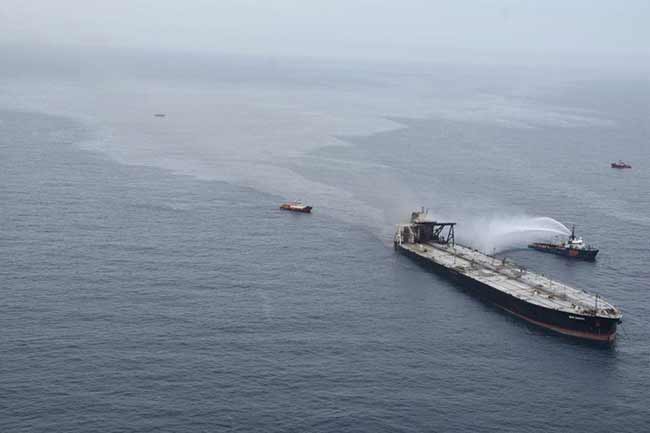 The panel of scientists appointed by the Marine Environment Protection Authority (MEPA) to investigate the marine pollution caused by the crude oil tanker ‘MT New Diamond’ which was engulfed in fire off Sri Lanka earlier this month, has submitted its report to Attorney General Dappula de Livera.

The AG’s Coordinating Officer State Counsel Nishara Jayaratne confirmed that the Attorney General received the report and that it confirms marine pollution by the ill-fated crude oil tanker.

The relevant report has been compiled by the MEPA authorities and an expert panel of scientists, he added.

Legal action to be sought against the oil tanker will be decided based on the recommendations of the report and the estimation of the losses related to marine pollution will be finalized without delay, MEPA General Manager said further.

The Attorney General met with the Marine Environment Pollution Authority (MEPA) and the expert panel of scientists preparing the report on Monday (21).

Meanwhile the the owners of the crude oil tanker ‘MT New Diamond’ have informed the Attorney General of their agreement to fully settle the interim claim of the government stakeholders for Rs. 340 million.

The AG today submitted a further claim of Rs 100 million to the owners of the crude oil tanker ‘MT New Diamond’, increasing the total claim to Rs 440 million.