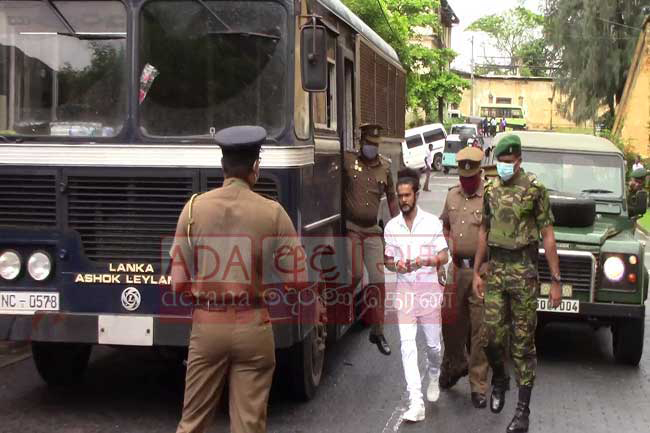 Notorious underworld figure Janith Madushanka, who operates under the alias “Podi Lassie”, has been further remanded until the 9th of October.

The order was delivered by the Galle Magistrate when the suspect was produced before courts this morning (25).

He has been named as the second suspect in the case filed over the death threats made in public at the Boossa Prison against the President, the Defence Secretary and certain high-ranking officers of the Prisons Department.

He was escorted to the court premises by the Police Special Task Force (STF) officers at around 9am this morning.

The Criminal Investigations Department (CID), on September 18, interrogated the suspect for over 06 hours at the Boossa Prison in connection with the threats issued to the VIPs.

Presenting submissions before the court, Deputy Solicitor General Dileepa Peiris from the Attorney General’s Department informed the magistrate that the CID has recorded statements from “Podi Lassie” on the 18th of September.

He told the magistrate that both “Podi Lassie” and ““Kosgoda Tharaka”, who allegedly levelled death threats in public at the Boossa Prison against the President, the Defence Secretary and certain high-ranking officers of the Prisons Department, had maintained innocence on the charges.

According to the duo’s statements, their recent protest fast over several demands was carried out for five days, the Deputy Solicitor General told the court. Probes, however, have revealed that during the hunger strike, the protesting inmates had ordered additional food sufficient for several days from the prison canteen, he added.

Presenting submissions on “Kosgoda Tharaka”, the Deputy Solicitor General said 30 firearms belonging to the 33-year-old criminal gang member have been discovered so far.

During the hearing, it was also revealed that “Kosgoda Tharaka” had served under the current defence secretary some time back.

The Deputy Solicitor General informed the Galle Magistrate that indictments will be filed against “Podi Lassie” and “Kosgoda Tharaka” soon.

It is further reported that the magistrate has rejected the request made by “Podi Lassie” to make a statement in the court.

He then asked the defendant as to how many lawsuits filed against him are currently being heard before courts, to which he responded “only one”.

The Deputy Solicitor General informed the magistrate that the defendant, despite being granted bail with regard to the relevant lawsuit, remains at the prison, noting that this is a strategy adopted by underworld figures. He also pointed out that it has cost a vast sum of money to the Boossa Prison.

The magistrate granted permission to the Criminal Investigation Department (CID) to record statements from infamous drug kingpin “Makandure Madush” and a prisons commissioner with regard to the incident, taking into account the request made by the Deputy Solicitor General.

Considering the submissions presented, the Galle magistrate ordered to further remand “Podi Lassie” until the 9th of October.