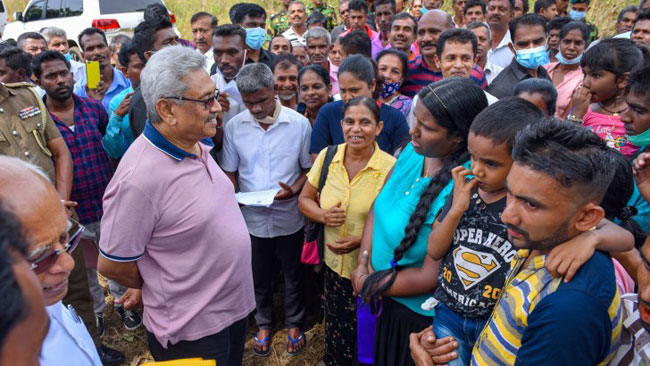 I will always stand by officials making right, unwavering decisions for people - President

President Gotabaya Rajapaksa has directed the officials to treat all verbal orders issued for the common good of the people as circulars to be implemented. “Those who neglect this will face stern action” President added.

The President made these directives at the “Discussion with Villagers” forum which commenced yesterday (September 25) at Velanwita village in Haldummulla, Badulla, President’s Media Division said.

“I expect public officials to consciously comprehend the problems of the people and provide solutions. I will always stand by the officials who make the right and unwavering decisions on behalf of the people. State institutions take a long time to address people’s issues. If a written inquiry from one institution does not receive a reply from the other institution within 14 days, consider it as approved.” President ordered.

The villagers pointed out to the President that the people have abandoned their traditional villages due to the unavailability of basic practices such as roads, electricity and drinking water.

They cited the fact that Kumaratenna Vidyalaya, which can accommodate a significant number of students, is now having only 16 students as a good example of this situation.

The President has directed the relevant authorities to carpet the road from the village 100 Acres to Velanwita, to identify water sources in order to meet drinking water requirements and to provide electricity within three months.

Villagers who had left many years ago attended the discussion yesterday said that the decisions taken by the President had given them the opportunity to live in their original villages again, PMD said.

The President ordered the officials to take steps to construct a new building for the benefit of the students of the Kumaratenna Vidyalaya and further informed the officials to provide opportunity for the children living in the surrounding areas to return to school and receive an education.

The President also addressed a number of other issues of the people of the surrounding areas who came to the discussion forum.

President Rajapaksa has ordered the officials to provide solutions for the teacher shortages prevailed in Kirawanagama and Nikapotha Maha Vidyalayas and Koslanda National School, and to construct the playground of Hali Ela Maliththa Maha Vidyalaya. Apart from that, it was decided to appoint a Principal for Wellawaya Gampaha Maha Vidyalaya, to address the shortcomings of Soragune and Janananda Vidyalayas and to upgrade Haputale Tamil Maha Vidyalaya to a national school.

Following a differently-abled former war veteran’s request President Rajapaksa ordered to carpet the Moraketiya road that extends to 7 villages in the vicinity.

President advised the speedy construction of the 35km stretch from Beragala-Wellawaya in the route between Colombo-Batticaloa road, the road up to Wellawaya in Kalipanawela Halkanna road, the 100-acre central road of the Kakkuturawa, the road connecting Dehilanda and Alutwela and other by-roads.

In addition, President ordered the officials to compile a list of issues pertaining to the lands owned by the Land Reforms Commission and Wildlife and Forest Conservation Departments presented by the public and to provide ownership certificates and deeds to them.

A large number of farmers in the Badulla district are among those who receive the highest number of black pepper harvest in the island and own prosperous farms. Most of them are inclined to use organic fertilizer in their black pepper plantations. Steps were taken to address all the issues they have encountered in this aspect.

A lengthy discussion was conducted in relation to issues faced by the farmers engaged in Paddy, Cinnamon and Coffee cultivations and in addition the President ordered to correct the mistakes occurred during previous Forest Conservation surveys.

President also addressed issues suffered by parents with children at the scene to the extent possible. Following the conclusion of the forum President visited a number of farmlands and residences inquiring into hardships they face.