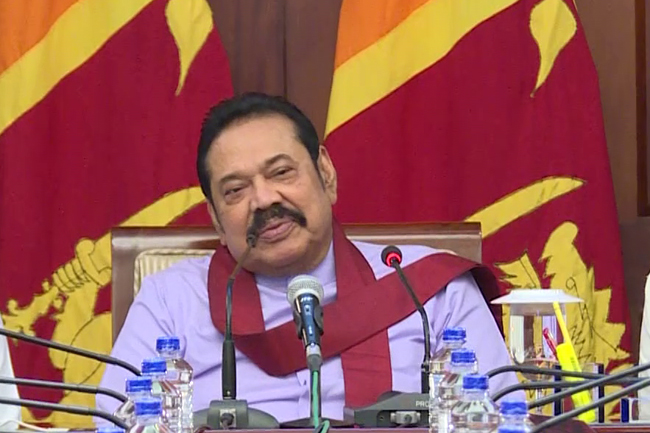 20A will not make Prime Minister a nominal post  Mahinda

The Prime Minister will not be made a nominal role through the 20th Amendment to the Constitution, says Premier Mahinda Rajapaksa.

Responding to the questions raised by heads of media institutions during a meeting held this morning (29), the PM noted that he stands by the government’s stance on the 20th Amendment.

When asked of the committees appointed to study the 20th Amendment by the parties affiliated to the government, the prime minister said: “Every party has a right to appoint committees in this regard. However, in the end, we will reach a unified agreement. The 20th Amendment was taken up for discussion during the meeting of the Cabinet of Ministers. I observed that the Opposition too has appointed a committee on the matter.”

During the meeting, Minister Gammanpila, in response to a question directed by a media person, said the Cabinet of Ministers has appointed a committee chaired by President’s Counsel Romesh de Silva to draft a new Constitution. A referendum vote is required to pass the new legislation, he added.

Minister Rambukwella, meanwhile, said the people’s mandate was given to them to abolish the 19th Amendment to the Constitution. “That is the short-term solution. The long-term solution will be bringing in a new Constitution.”

Media persons then asked PM Rajapaksa of a news report which had claimed that he intends to retire from politics. To this, he responded in the negative.

When inquired of the measures that are being taken to boost the country’s economy affected by the outbreak of the COVID-19 pandemic, the Premier said the government’s policy is to prioritize the domestic economy. “The government has already initiated measures to strengthen local industries.”

Moving on to a question on reopening the airport, he noted that the government has mulled the matter while studying the prevailing situation in India as well as Europe.

Speaking on the import of turmeric, the prime minister said, “Local farmers are in the process of cultivating turmeric. We cannot discourage them. In order to strengthen the local turmeric farmers, we have to move forward while facing the current situation. If we import turmeric again, local farmers will abandon their cultivation.”

PM Rajapaksa, in response to a query regarding the MCC agreement, emphasized the government has not carried out any clandestine discussions on the matter.

Expressing confidence in eradicating the drug menace that has plagued the country, he highlighted the need to apprehend the major figures involved in drug trafficking.

He also said the measures to extradite the main suspect in the bond scam, former Central Bank Governor Arjuna Mahendran, are being carried out continuously.

PM Rajapaksa further revealed that plans are afoot to construct a 100-unit housing scheme in each electorate and that construction work of the project is expected to commence without delay.