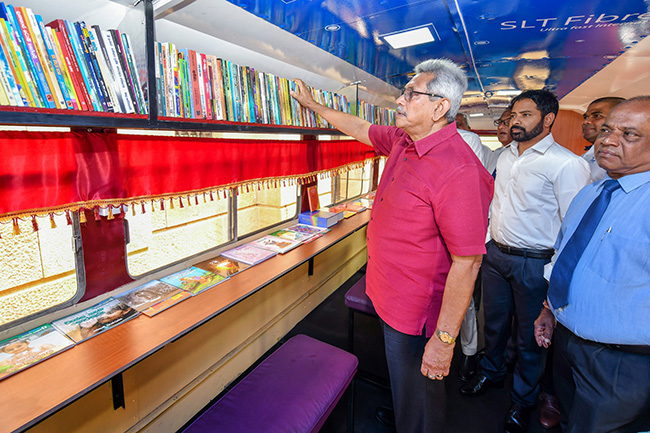 President stated that the provision of a library and access to sports will help children to maintain the balance between physical and mental well-being. President added that he was convinced of this fact during his recent visits across the country.

Following requests by children, the construction of a large number of playgrounds in remote areas of the country is now underway.  In addition, provision of library facilities for 25 selected schools representing each district has commenced, the PMD added.

The 1st of October, which marks the World Children’s Day, coincides with the beginning of the Reading Month. President Rajapaksa has summoned students from 5 schools and donated 5 libraries with the intention of simultaneously motivating the next generation to read books.

Buses that had been out of commission were repaired in an attractive manner as libraries for school children. Each fully-fledged library cost around Rs. 1 million. Mobitel, the telecom firm has provided e-library facilities, thereby enabling students to study Information Technology and refer e-books online.

The project to provide libraries was sponsored by the Sri Lanka Transportation Board (SLTB), Manusath Derana, National Library and Documentation Services Board and SLT Telecom and Mobitel.

The books donated by the publishers at the annual book exhibition at BMICH were also handed over to these libraries.

The President also engaged in cordial conversation with the students and invited them to visit the Presidential Secretariat as well, the PMD said further.