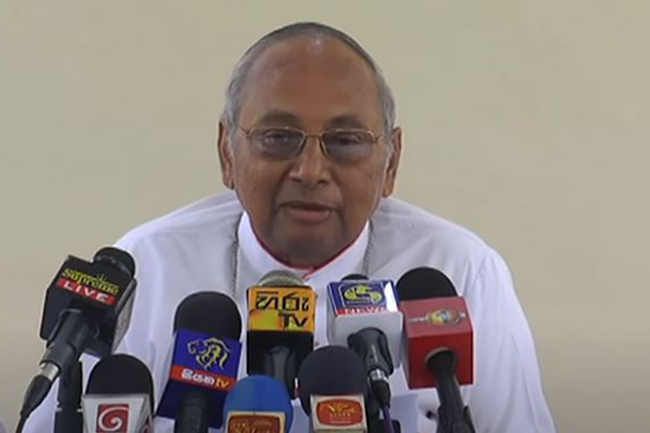 His Eminence Malcolm Cardinal Ranjith has raised concerns over the Criminal Investigation Department (CID) releasing Riyaj Bathiudeen, the brother of MP Rishad Bathiudeen, who was detained over the alleged links to the Easter Sunday terror attacks.

Over the last few days, it was observed that the suspects, whose actions were investigated over the allegations pertaining to the Easter Sunday bombings, were released from custody the CID, he remarked.

In a special media briefing held this morning (03) at the Archbishop’s House in Colombo, the Cardinal said it is doubtful whether a “political deal” is behind the move.

Surprised and saddened by the CID’s conduct, he urged the authorities to properly carry out the investigations in this regard.

The Cardinal also referred to a statement made by Police Spokesperson SSP Jaliya Senaratne, in which he said that investigations into the carnage have revealed that the parliamentarian’s brother has had maintained direct links with the bombers.

Speaking further, the Cardinal pointed out that the police spokesperson’s statement and the CID’s move are in complete contradiction.

SSP Senaratne in a recent media briefing announced that Riyaj Bathiudeen was released due to “lack of evidence” to file a case against him.