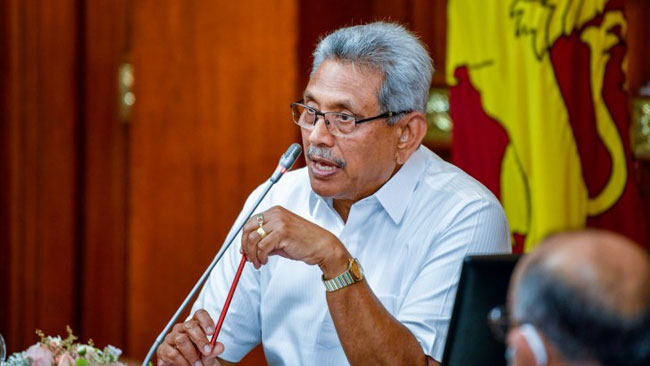 President Gotabaya Rajapaksa has instructed relevant parties to take immediate measures to increase the number of PCR tests and to contain the spread of COVID-19 after identifying of close associates of the affected.

As close associates of the infected have been identified, the President has advised to send them to the closest hotels to undergo the quarantine process, stated President’s Media Division.

According to the PMD, doctors are of the view that the failure on the part of the people to follow health guidelines issued by the Government, with the passage of time, is the main reason to the sudden spike in the number of affected.

President Rajapaksa pointed out that despite reporting the global scenario, the awareness campaign carried out in the country to educate the public was missed by the country’s mass media. People also have forgotten the prevalence of the disease, President said.

Instructions have been issued to carry out random PCR tests in every district in the country as well in institutes. Organizations where a large number of employees, in particular, have been asked to conduct tests. However, it does appear that the factories with large work forces have neglected this responsibility, President added.

“The general public and the media are obliged to assist the initiatives to control the spread of the pandemic with a clear understanding of the current situation.”

President also said that a thorough investigation should be carried out into the presence of COVID infected from the community after a lapse of two months.

Paying tribute to the great efforts by the Police and the Public Health Officers, President emphasized the importance of carrying out the program at village level.

As steps have already been taken to prevent people from leaving areas where infected patients were identified, other factories and institutions in the area will be randomly checked for COVID-19 infections, stated PMD.

The President also pointed out the need to conduct random inspections at workplaces, with the participation of the private sector.

The Police noted that many precautions that had been identified as measures to be taken to prevent the spread of the COVID-19 were not properly followed by the public. The requirement to gazette the existing rules and regulations aimed at preventing COVID-19 was also discussed at the meeting.

In addition, President Rajapaksa instructed the media to continuously apprise the public regarding the coronavirus.

The potential of indigenous medicines to strengthen the immune system and to speed up the healing process had also been discussed in detail.

Minister Pavithra Wanniarachchi, State Minister Sisira Jayakody, Secretary to the President P.B. Jayasundera , Principal Advisor to President Lalith Weeratunga and the members of the Presidential Task Force for Prevention of COVID-19 Outbreak were present in this meeting.