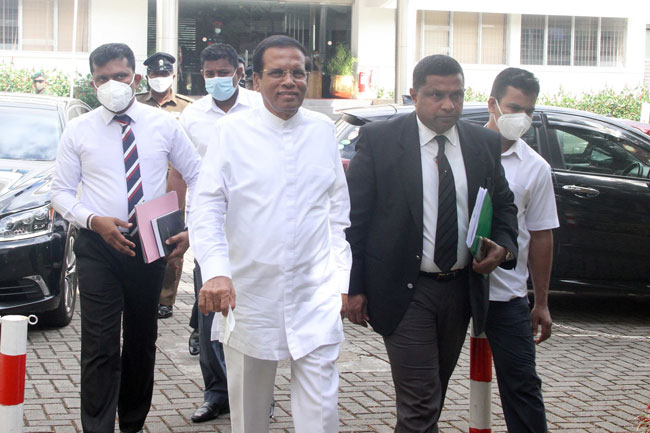 The Presidential Commission of Inquiry probing the 2019 Easter Sunday terror attacks was told by former President Maithripala Sirisena today (05), that he was left in the dark regarding the crucial foreign intelligence warning, up until the day following the attacks.

The former Commander in Chief at the time added that then-Defense Secretary Hemasiri Fernando and IGP Pujith Jayasundara had numerous opportunities to brief him on the warnings but failed to do so and if they had, he would have personally ensured that no attack took place on Sri Lankan soil.

The Additional Solicitor General at the Commission asked the former President whether a Committee of Inquiry appointed to investigate the attacks last year.

The former President responded: “I was undergoing medical treatment at a hospital in Singapore when the attacks took place. I was informed of the attacks by my Chief Security Officer when I arrived back at my hotel from the hospital.

There was a flight to Sri Lanka at around 10 pm on the night of the attacks. I arrived back in the country at around midnight. The next day I summoned the National Security Council. ”

The Additional Solicitor General then asked what action he took to prevent the extremism and terrorism during his presidency from 2015 to 2019. He replied: “No Head of State of any country wants terrorism to rear its head during his tenure. During my presidency, I instructed officials to eradicate terrorism and extremism at their roots.

The Additional Solicitor General then asked the former President to explain the reasons behind appointing 11 out of 22 Muslim MPs in his government as ministers.

In response he stated, “Ours was a coalition government. Almost all Muslim ministers were not on my side. They were from the other side of the coalition. I was able to run the government with the support of parliament for only 6 months after taking office. The rest of the time I did not have a Prime Minister, a Cabinet, or a parliament that supported me. After the appointment of Arjuna Mahendran to the post of Central bank Governor and the subsequent Central Bank Bond Scam, I had difficulty in controlling the government.

At that time Tri-Forces officers and intelligence officers who made great contributions during the war were being arrested. But I avoided these issues and took the government forward.

Until December 2018, the Police and the CID were not under my control. After they came under my control, I brought in all the Senior DIGs of the island and started holding monthly meetings. Some have testified before this Commission alleging that the National Security Council was weak. But at no time it was weak.

No one kept me informed about terrorism. I was only briefed on extremism. It was only in 2019 that  I was briefed on Zahran’s extremist ideology.”

The Additional Solicitor General then asked the former Head of State “Did you not question the police as to why Zahran Hashim was not arrested despite a warrant being issued after the Aliyar Junction clash on March 10, 2017?”

He replied, “The President does not need to give orders to arrest a suspect who has been warranted. I had previously questioned the need to discuss such topics at the National Security Council. That is the responsibility of the police.

To this, the Additional Solicitor General asked him if that is not the President’s business, why then did he order Zahran’s arrest at a later stage.

The witness replied, “I did give such an order later. I had received reports that Zahran was operating along ISIS lines. Hence, I ordered his immediate arrest.”

The Additional Solicitor General then asked him, whether he had ever hear of 8 bombs exploding in a single day during the LTTE conflict.

He replied,” No. all sectors responsible for this area had suffered major setbacks. Those who received information that an attack was imminent should have taken immediate action.

I had left for medical treatment in Singapore at the time of the attack. I was in Sri Lanka until April 16. We now know that this information was received on April 04. There was a meeting of senior police officers on April 08. I visited Batticaloa on April 12. Even at that point my Chief Security Officer was not informed.
After this, Defense Secretary Hemasiri Fernando travelled from Diyathalawa to meet me, followed by IGP Pujith Jayasundara. The duo stayed for two hours and left after lunch. Even then they didn’t tell me. Later when I left for the airport, Pujith came to see me. He boarded the plane, wished me a safe journey and saluted me. I told him I would be back in four days and instructed him to carry on with his work.

If he told me at that time, I would have cancelled at my trip. It was a great shock to have this tragedy happen during my presidency. The intelligence received on April 04 was only briefed to me on April 22. It was a huge shock to me.

If I was told of this I would have informed the Cardinal, convened the Security Council, and taken necessary action. Then this tragedy would not have been allowed to happen. The biggest problem is that I was not told of this. If they had even told me over the phone, I could have stopped this.”