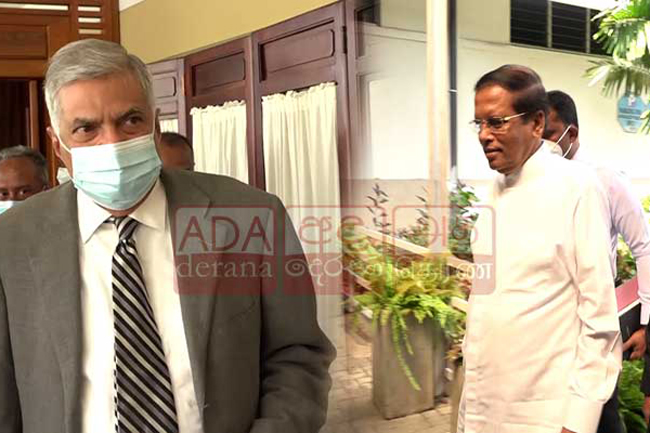 Former Prime Minister Ranil Wickremesinghe told the Presidential Commission of Inquiry (PCoI) probing the Easter Sunday Attacks on Tuesday (06) that despite being elected as a Common Candidate with the support of a massive coalition of parties, the straw that broke the camel’s back in the end was former President Maithripala Sirisena’s partisan behaviour, soon after assuming the SLFP Chairmanship.

Former President Sirisena meanwhile told the PCoI that like other Presidents across the world who have dealt with terrorist tragedies, he will not accept security failures.

When the former Prime Minister arrived at the PCoI premises on Tuesday (06) to give evidence, the Additional Solicitor General of the Government asked him if it is normal for conflicts to arise within such a close family, he responded, “Which family does not have problems? On October 26, 2018 Maithripala decided to change the government. He believed that he had enough parliamentarians backing him. In any case after the October 26 incident, I was not invited to sit with the National Security Council.”

Speaking further he said, “I also asked Mahinda Rajapaksa, the former PM of the 52-day government, whether at least he was invited to sit with the National Security Council but it turned out that even he was not asked to attend. Although the United National Party (UNP) and other parties worked to make Maithripala Sirisena the Common Candidate, he later displayed signs of partisanship, after taking over the SLFP chairmanship. This was criticised even by Venerable Maduluwawe Sobitha Thera.”

The Additional Solicitor General then asked if the October 26 constitutional crisis happened because of the UNP not lending its support for former President Sirisena.

In response, Wickremesinghe said Sirisena had never commanded a strong vote base. “He did not even have the full support of the SLFP. It was me, who ensured the support of the other parties for him. Your line of questioning is one-sided. Wait, one day I will write a book containing all these stories.

After one and half hours of testimony, the President’s Counsel representing the former Prime Minister requested to adjourn the proceedings and to assign an alternate date, citing the ill health of his client.

The Additional Solicitor General asked him if the then-Inspector General of Police (IGP) and the Director of State Intelligence Service had attended a meeting of the senior police officers chaired by him on the 8th of April last year.

Sirisena replied, “The duo did attend the meeting, but neither of them informed me about the foreign intelligence warning that had been shared with the SIS Director Nilantha Jayawardena, who called me after the attacks. He told me that there had been several explosions and that he is unsure if there will be more. He also stated that he had informed IGP Pujith Jayasundara and Defence Secretary Hemasiri Fernando about this, however, necessary steps had not been taken.”

The Additional Solicitor General accordingly asked the witness as to why he did not ask Jayawardena about not informing him of the attacks.

Sirisena responded that he did question Jayawardena about this. “But he told me that he only informed those who could have taken action. He said he tried contacting me the night before, however, he had not been able to get through to me.”

“If there was evidence to prove that the relationship between you and SIS Director Nilantha Jayawardena was somewhat of a father-son relationship, would you accept it?” the Additional Solicitor General then asked the former President.

To this, he responded that the father-son relationship existed between himself and Hemasiri Fernando. “That is why I appointed him as the Defence Secretary.”

He added, “The Defence Secretary enjoys the respect of the armed forces chiefs and has a helicopter at his disposal. There are unlimited perks that come with the post, Hemasiri was also given key posts in a number of government institutions. I have never heard of anyone being given such positions before. I gave him those posts because I had known him for over 25 years. Hemasiri used to take me home for meals as well.”

When the Additional Solicitor General raised a question as to when such a relationship turned into a nightmare, the former Head of State replied, “On the 21st of April last year. The IGP and the Defence Secretary should be responsible for this. The attacks happened because they ignored intelligence warnings. I feel the most pain from this, however no one believes it. I became unpopular among the public because this happened during my tenure. Similar tragedies happen in other countries, however, the President does not bear full responsibility just because they happen. If there is terrorism in a country, it is the responsibility of the security forces to suppress it.

The Additional Solicitor General then asked, “Who was it that opposed the suggestion by the armed forces commanders to the National Security Council to ban the wearing of the niqab, citing threats to security. The PM opposed the move at the Cabinet meeting. All the Muslim ministers in the coalition government were supportive of the PM. he raised objections because they were opposed to it. At that time there was a minority government. Ranil Wickremesinghe said that it would be a massive problem if the Muslim ministers left the government because of this issue.”