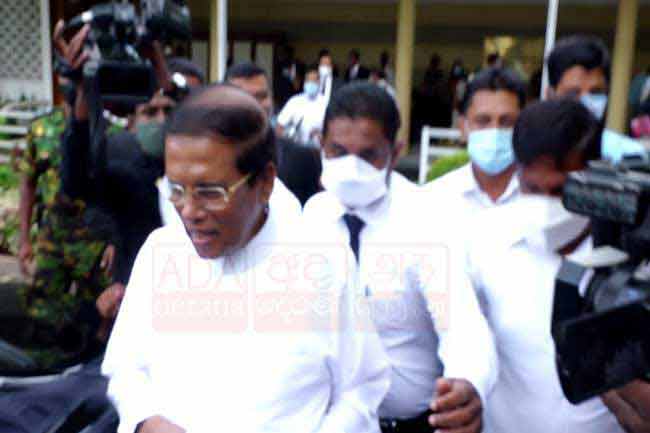 Former President Maithripala Sirisena says that he fought a line battle, when the former government, in which he was President, attempted to imprison pioneers of Sri Lanka’s victory in the conflict with the LTTE terrorists.

His comments came during the proceedings of the Presidential Commission of Inquiry probing the 2019 Easter Sunday terror attacks, during which he also criticized his own Defence Secretaries.

He also told the Commission, that former Defence Secretaries lied to him about holding intelligence coordination meetings weekly, when he was shown evidence, that they weren’t.

The former Defense Secretary Hemasiri Fernando, former IGP Pujith Jayasunadra, and the former Director of the State Intelligence Service (SIS) Nilantha Jayawardena who were named as respondents over the failure to prevent the attacks were at the premises to witness the testimony of the former President who appeared before the Commission for the second day today (12).

The State’s Additional Solicitor General asked the former President as to why 5 Defence Secretaries were sporadically appointed during his tenure as the Head of State.

He also told the Commission that some reasons for the change in defense secretaries should be given without media presence, and submitted them to the Commission in writing.

The Additional Solicitor General then put to the witness that, state officials that testified before the commission said that they faced practical issues in conveying information pertaining to national security, owing to the sporadic change in Defense Secretaries.

The former President responded, “There was an intelligence coordination meeting every Tuesday, with the attendance of Director SIS, Director of Army Intelligence Directorate, the tri-forces commanders, and the State Minister of Defense. As such, change in defense secretaries was not a hindrance for responsible factions to be aware on national security.”

The Additional Solicitor General then asked the former President whether he can confirm that the intelligence coordination meetings were held once a week during your tenure, as it was held weekly on every Tuesday before 2015.

The former President’s response to that was, “There were no reports of the intelligence coordination meetings not being held, and it looked to have been held continuously.”

At this point, the Additional Solicitor General showed former President Sirisena records from 2015 to 2018 depicting lapses in holding the intelligence coordination meetings.

After perusing the records, former President Maithripala Sirisena said, “So these records make it apparent as to why I changed defense secretaries from time to time. They had even lied to me saying that it’s held weekly.”

The Additional Solicitor General then questioned the witness whether he summoned personnel from the Criminal Investigation Department (CID) and made enquiries about on-going investigations, when Sagala Ratnayake was the Minister of Law and Order.

The former President said, “Yes, I summoned then-Minister Sagala Ratnayake and senior officials of the CID and made an enquiry. It wasn’t as much an enquiry, but a severe criticism, because by then, pioneers of the war victory, former defense secretary, and the tri-forces commanders were set to be taken to court.

They worked together with NGO’s to imprison one of the chief contributors to the war victory, Officer Suresh Salley. It was I who gave Salley a position and sent him to Malaysia to save him from being imprisoned.

There was a day when the pioneers of the war victory, former defense secretary, and the tri-force commanders were taken to court, but I wasn’t aware of it until it happened. They were taken to court under a bribery and corruption case.

Processions at Buddhist temples too had to be stopped during that time. Elephants were taken over to the government, citing animal cruelty. There were also issues when conducting the procession of the Sacred Tooth Relic.

I fought alone. The last blast in the end was the removal of Ranil Wickremesinghe and the appointment of Mahinda [Rajapaksa] as Prime Minister.”

The former President also told the Commission that he instructed the Cabinet to crackdown on extremist ideologies during this time.

The Additional Solicitor General asked the witness as to how the explosions happened at 8 different locations on April 21, 2019, if instructions were given to that tune.

A situation like this was caused, as the given instructions were not passed down.”