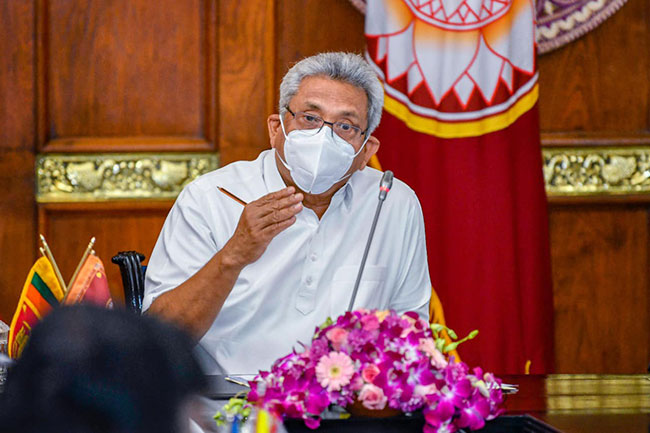 President Gotabaya Rajapaksa emphasizes the requirement of establishing a market that guarantees higher prices for farmers and a concessionary price for consumers, the PMD reported.

The President points out that this objective can be realized by preparing a background that enables farmers island-wide to sell their produce without the involvement of the middlemen.

He made these comments during a discussion with the Committee on Cost of Living at the Presidential Secretariat yesterday (October 14), the President’s Media Division reports.

The President and Prime Minister Mahinda Rajapaksa focused on strengthening of measures to ensure the continuous distribution of essential consumer goods across the country without suffering a shortage.

The President also instructed the officials to plant Coconuts in the lands classified as abandoned, immediately. The government has commenced the plantation of Coconut plants in 50,000 acres.

Head of the Presidential Task Force for Economic Revival, Mr. Basil Rajapaksa noted that a proper strategy is being implemented to produce vegetables, fruits and eggs to meet the consumer demand within the area itself.

Ministry of Health has surveyed the daily consumer demand of a household. “We have devised plans to grow vegetables, fruits in home gardens of low-income families and fulfill the demand for eggs through domestic poultry farms as a measure to uplift their lives,” Basil Rajapaksa added.

The officials at the discussion showed that the Paddy harvest of the Yala and Maha seasons this year have been favourable compared to the last year. President Rajapaksa highlighted the need for introducing new methods to purchase paddy harvest in the future.

It was also stated during the discussion that a special programme has been planned to transport fruits, vegetables and fertilizer via trains with the assistance of the Sri Lanka Railways.

Prime Minister Mahinda Rajapaksa, Ministers Bandula Gunawardana, Mahindananda Aluthgamage, Douglas Devananda, State Ministers Lasantha Alagiyawanna, Arundika Fernando, Head of the Presidential Task Force for Economic Revival Mr. Basil Rajapaksa, Secretary to the President P.B. Jayasundera, Secretaries of the Cabinet and State Ministries and the members of the Committee of the Cost of Living were present at the discussion.