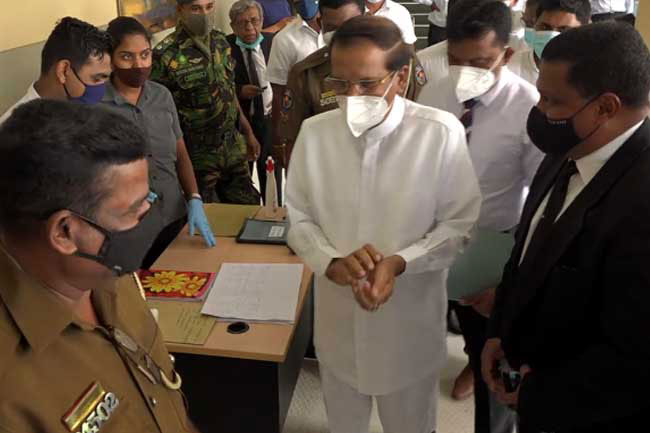 Former President Maithripala Sirisena yet again before the Presidential Commission of Inquiry probing the 2019 Easter Sunday terror attacks today (17) and rejected the allegation that he attempted to make the former IGP the scapegoat following the massacre.

Former President Sirisena also rejected the testimony of the former Defence Secretary Hemasiri Fernando where he said he was asked by the Head of State not attend the meeting chaired by then-Prime Minister Ranil Wickremesinghe in the immediate aftermath of the attacks.

The former President insisted that his instructions were in fact to work together.

Former President Maithripala Sirisena was asked by the Additional Solicitor General at the Presidential Commission that whether it isn’t wrong not to appoint an acting Minister of Defence when he left the country on April 16, 2019, especially in the backdrops of intelligence units reporting of incidents of Lord Buddha statue vandalism in Mawanella, discovery of explosives in Wanathawilluwa, and Zahran Hashim’s Jihadi ideologies.

The witness responded,”Though those incidents had happened by the time I left the country, no one had warned of an act of terrorism within the country. Since 2015, I had given instructions on what measures need to be taken on extremism.

This information wasn’t first received on April 20. This foreign intelligence had been received before that. If I wasn’t in the country, the President’s Secretary could have been informed, since had that happened, he would have notified me instantly. The error here is not informing, since even the documents imposing emergency regulations is done by the President’s Secretary.”

The Additional Solicitor General then put to the witness, the country’s second citizen, PM Ranil Wickremesinghe, called a meeting when the initial blasts happened on April 21 and evidence has been submitted that the witness had instructed the President’s Secretary, the Defence Secretary, and other officers to refrain from attending the said meeting. The Additional Solicitor general therefore asked former President Sirisena as to why he gave such instructions.

The former President’s reply to that was, “No, I did not give such instructions. What I said was to work together. “

When the Additional Solicitor General asked whether he took measures over his instructions not being enacted, the former President said that question arises as to how many state officials will be left, if action is taken against their dereliction of duty, weaknesses, and mistakes.

The Additional Solicitor General asked the witness whether he would accept if he said that Zahran sank and Namal Kumara rose, after the portfolio of Law and Order was taken over by the witness.

When the Additional Solicitor General asked the witness whether he told former IGP Pujth Jayasundara that even the Malalgoda Committee Report will be altered, if the IGP takes responsibility over the failure to prevent the attacks, former President Sirisena said “That’s an utter lie”.

The Additional Solicitor General then asked the witness “If evidence has been submitted before the Commission saying that the Easter Sunday attacks happened because the National Security Council did not give due attention to acting against extremism, would you accept it?”

The reply of former President Sirisena was, “No, I reject it completely. What has happened here is that relevant sections have not acted on the received information, Not enacting the instructions given over the years. They have not reported anything on such an attack. The Navy intelligence operated strongly in the Eastern areas. But no one updated me on the dry-run the terrorists did on April 16, blowing up a motorcycle in the area of Thalankuda.”