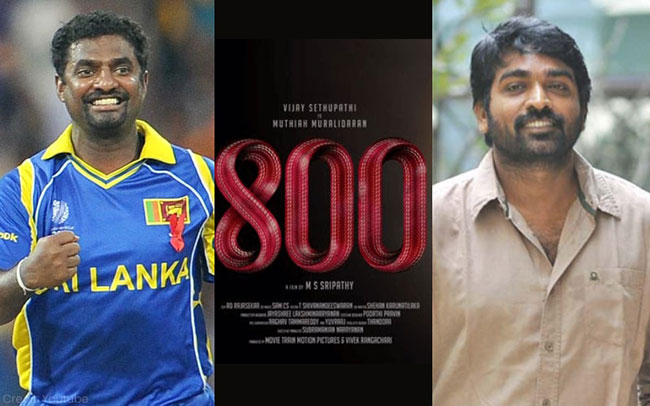 Murali tells actor Vijay Sethupathi to opt out of biopic 800

Indian actor Vijay Sethupathi Monday announced that he was opting out of the biopic ‘800’ based on legendary Sri Lankan spinner Muttiah Muralitharan, on the cricketer’s request.

The development comes days after the biopic’s announcement led to a controversy in Tamil Nadu over what is seen as the celebrated Sri Lankan bowler’s “support” for the government in Sri Lanka during the country’s 26-year-long civil war.

Sethupathi, who has been criticised for signing the movie, shared a letter by Muralitharan on Twitter Monday in which the cricketer has asked the actor to quit the project, saying there should no hurdles for him in future due to the biopic.

The actor responded to the letter saying, “Thank you and good bye”. Later, Sethupathi’s publicist also confirmed that the actor has opted out of the biopic.

A controversy had erupted soon after Sethupathi announced on 8 October that he would be playing the role of Muralitharan.

In a statement on 16 October, the former Sri Lankan bowler said he “had never endorsed the killings of innocent people”. He also said that he saw no difference between Sri Lankans, Malayaga Tamils (who have Indian lineage) and Eelam Tamils (those demanding a separate state in Sri Lanka).

According to the film’s producers (Dar Motion Pictures), the movie was meant to focus on Muralithiran’s cricketing life and his achievements as a player. The shooting for the biopic was to start in March 2021 and the producers were planning to dub it in Hindi, Bengali and Sinhalese, besides having English subtitles.

Muralitharan is the only cricketer to have taken 800 wickets in Test cricket. Besides, he also picked up 534 and 13 wickets respectively in 350 ODIs and 12 T20Is.

A rough translation of Murali’s letter:

“I am issuing this statement after controversy erupted by a few people in Tamil Nadu based on my biopic - 800.

Every time I face hurdles, I don’t get tired. I battle it out, win it and that is why I have reached this stage in my life. This movie will be an inspiration for future generations to come and for young cricketers and will give them encouragement and will power. It was the reason why I accepted the making of this biopic. I am sure that the creators of this movie will make it reach such people despite the hurdles. Producers have assured that further information regarding this will be announced soon. I will stand by their efforts.”