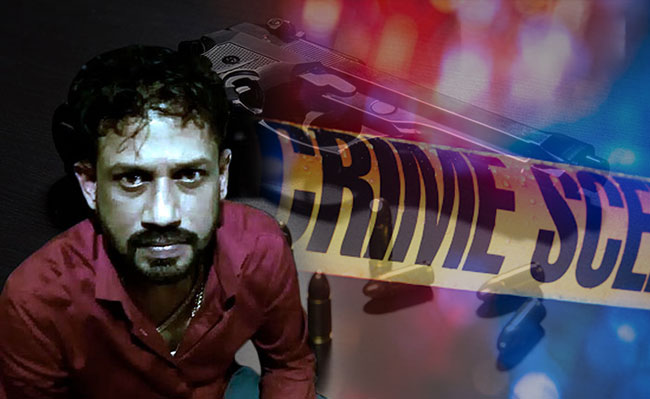 After uncovering information regarding a stock of 22 kg of heroin hidden at the Maligawatte Housing Complex, officers of the Colombo Crimes Division (CCD) had visited that location along with Makandure Madush.

However, suspected underworld figures and drug traffickers had then reportedly opened fire at them.

Makandure Madush and two officers of the CCD were shot in the crossfire that ensued.

Madush had later succumbed to injuries.

Police have recovered 22 kilograms of heroin, 02 pistols and a motorcycle during investigations at the Maligawatte housing complex, where Madush was shot dead.

Meanwhile two Police Constables attacked to the CCD have also been injured in the shootout.

Based on the information divulged the drug kingpin during interrogations, a consignment of heroin weighing nearly 10kg had been seized from Kotikawatte area by the CCD on Saturday (17).

Samarasinghe Arachchige Madush Lakshitha alias Makandure Madush was an underworld gang leader in Sri Lanka, who had been in hiding abroad for several years before his arrest.

Madush was previously under the custody of the Dubai authorities after being arrested at a drug-fuelled party thrown by him in a Dubai hotel, back in October 2018.

Along with him, 31 Sri Lankans including underworld figures and celebrities were also arrested in Dubai.

Madush was deported from Dubai in on May 05, 2019 and was taken into the custody of the CID upon his arrival at the BIA.

He had allegedly operated his drug network, extortion rackets and other criminal activities through his accomplices in Sri Lanka. Sri Lanka Police had been on the hunt for Madush, who was one of Sri Lanka’s most wanted criminals, for the past couple of years as he had managed to evade arrest by Sri Lankan and foreign authorities on numerous occasions.