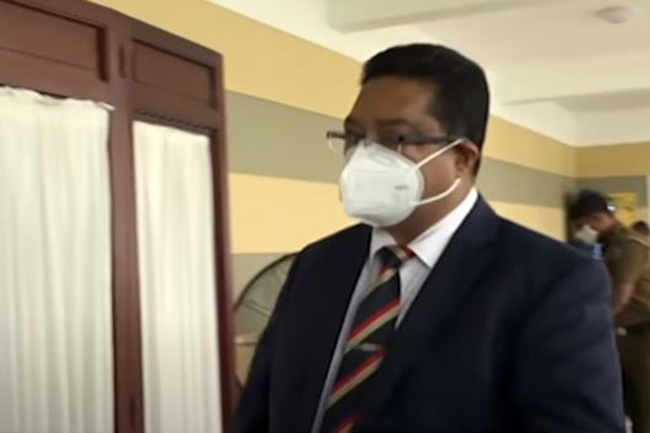 When Jayawardena said he only contacted the former President on 61 occasions from the 1st of December 2018 to the 1st of May 2019, the President’s Counsel Shamil Perera, representing Archbishop of Colombo His Eminence Malcolm Cardinal Ranjith had shown the Commission otherwise.

Former SIS chief was also sternly warned by the Commission’s chairman over the manner in which he responded to the questions during the cross-examination, which commenced on Monday (19).

The President’s Counsel had asked the witness if there had been an environment where the State Intelligence Chief connected with the President on a daily basis.

After pursuing his data, the former SIS Director said, “I only connected with the President on 61 occasions between the 1st of December 2018 and 1st of May 2019.”

Quoting telephone records, President’s Counsel then put to the witness that during the period from 1st of January 2019 to 31st of March 2019 alone, he had connected with the President on 138 occasions via calling the Pajet Road official residence of the President.

Later, highlighting the telephone records, the President’s Counsel made evident to the Commission that 14 phone conversation had taken place since a forewarning was given by a foreign intelligence agency until the 20th of April.

When the President’s Counsel asked the former SIS chief as to why the President was not briefed on the foreign intelligence in this backdrop, he replied that he did not convey it to the President.

Subsequently, President’s Counsel Anura Meddegoda who represented for IGP Pujith Jayasundara asked the witness if the foreign intelligence agency which provided the forewarning gave a special notification in the morning of the Easter Sunday on which the attacks happened.

In response, Jayawardena said: “At around 8.27 am on Easter Sunday, the same foreign intelligence agency, which provided the forewarning, informed that an attack can happen between 6.00 am and 10.00 pm on that day. I called then-Defence Secretary Hemasiri Fernando at around 8.46 am to brief him on the message, during which the first two explosions occurred.”

President’s Counsel Maithri Gunaratne, appearing on behalf of former President Maithripala Sirisena, asked the witness, “Wasn’t there a threat of an attack well before the 21st of April, since the foreign intelligence agency warned of an imminent attack, on the 4th of April.

To this Jayawardena replied that there was a threat and that is why he called the informant and confirmed it.

He added that there would be no need for a State Intelligence Service in the country just to share information with the other sections, as soon as they are received.

The Chairman of the Commission, who was unhappy with the manner in which the former SIS director responded during the cross-examination, said: “I have advised you before as well. Only respond to the questions posed by the lawyer who is supporting the Commission. Do not argue or pose questions. So, I am sternly advising you for the last time. If this repeats, legal actions will be taken.”

Meanwhile, concluding the evidence of former Defence Secretary Hemasiri Fernando, his legal counsel Dilshan Jayasuriya asked his client if he had observed that the former President was in ill health when he saw him at the airport on the 16th of April, before he left the country, especially since he had said that he was abroad when the attacks happened for medical treatment.

To this Fernando replied that he did not observe any indication of the former President being in ill health.