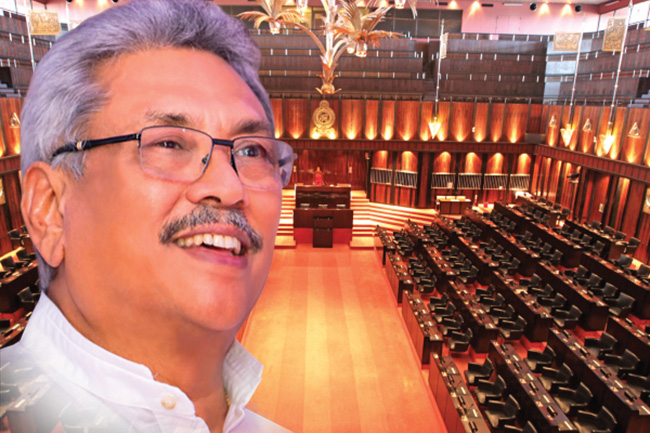 President arrives in Parliament mid-debate on 20A

President Gotabaya Rajapaksa has arrived in the Parliament while the debate on the draft bill of the 20th Amendment to the Constitution is in progress, Ada Derana correspondent said.

Members of Parliament commenced the two-day debate on the proposed bill last morning (21) and are proceeding with the debate from until 7.30 pm for the second consecutive day today.

The Committee Stage of the proposed 20th Amendment is expected to commence at 7.30 pm post the debate and the legislators will vote on the draft bill thereafter.

Opening the two-day debate yesterday, Minister of Justice Ali Sabry stated that the government has made amendments to the draft bill considering the public opinion.

He also noted that it will be amended to limit the Cabinet of Ministers to 30 portfolios with another 40 non-Cabinet portfolios, and the Emergency Bills will be limited to cases of national disaster or events affecting national security, among other amendments.

Despite having being given the go-ahead from the Supreme Court, the government has decided to amend the draft in consideration of the concerns raised by the public on the draft constitutional amendment, he said.

Accordingly, the draft will be amended to limit the Cabinet of Ministers to 30 portfolios with another 40 non-Cabinet portfolios, and the Emergency Bills will be limited to cases of national disaster or events affecting national security, among other amendments, Sabry said.

He further said that the 2 Articles determined inconsistent with the Constitution will also be amended as per the order of the Supreme Court.