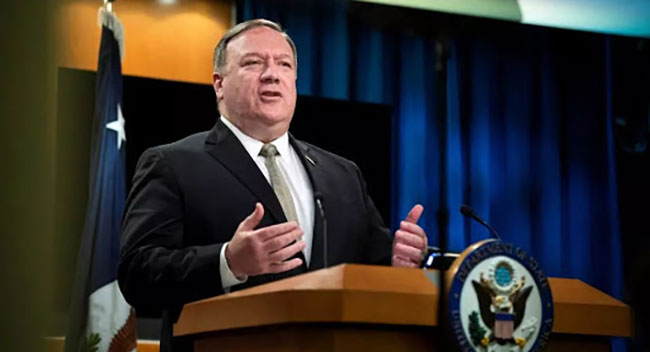 WASHINGTON--The United States is urging Sri Lanka to make “difficult but necessary choices” to secure its economic independence instead of choosing opaque practices, a senior State Department official said on Thursday, in an apparent reference at China deepening its influence over the South Asian country.

U.S. Secretary of State Mike Pompeo will visit Sri Lanka next week as part of a wider trip that includes India, Maldives and Indonesia with the main goal expected to be garnering support in countering China.

Pompeo’s trip comes a week before the Nov. 3 U.S. election in which President Donald Trump has made being tough on China a key part of his campaign to secure a second term. He has blamed China for mishandling the spread of the coronavirus which has killed 221,000 people in America and over 1.1 million globally.

Pompeo and other senior U.S. officials have kept a harsh rhetoric on China, dismissing Beijing’s investments across the globe as “debt diplomacy” alleging that it leaves poorer nations saddled with too much debt.

In a telephonic briefing with reporters, without explicitly naming China U.S. officials warned the Sri Lankan government about who they team up with for their economic partnerships.

“We encourage Sri Lanka to review the options we offer for transparent and sustainable economic development in contrast to discriminatory and opaque practices,” said Dean Thompson, principal deputy assistant secretary at State Department’s Bureau of South and Central Asian Affairs.

“We urge Sri Lanka to make difficult but necessary decisions to secure its economic independence for long-term prosperity,” Thompson said.

China has been making increasing inroads into South Asia with its Belt and Road Initiative, aimed at financing critical infrastructure in dozens of countries across the world.

In 2017, Sri Lanka signed over control of a Chinese-financed port and land around it to Beijing after incurring heavy losses, to the alarm of the United States and regional power India.