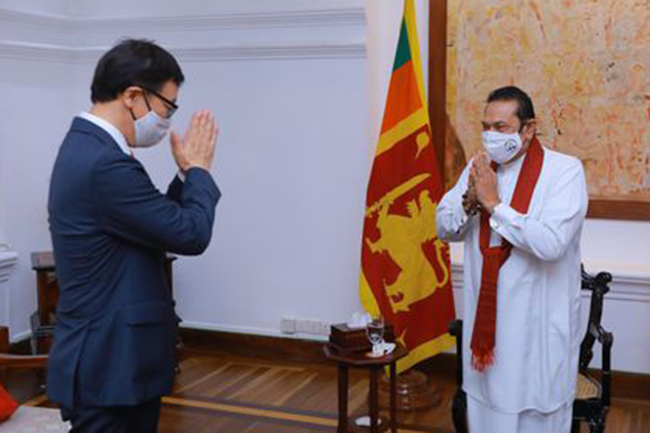 Korean Ambassador calls Sri Lanka one of the safest countries

Calling on Prime Minister Mahinda Rajapaksa at Temple Trees this evening (23), Ambassador of the Republic of Korea Woonjin Jeong called Sri Lanka “one of the safest countries,” and said he is actively encouraging Korean investors to explore opportunities in Sri Lanka.

In a press release, the Prime Minister’s Office said Korea was one of the largest investors in Sri Lanka some decades back. Currently, there are more than 115 Korean companies operating in the country, and total trade between the two countries stood at US$ 327 million last year. Both countries are keen on increasing that number, the statement read further.

Ambassador Jeong also congratulated PM Rajapaksa on the victory in the recently-held General Election and said it was “trust and confidence” that resulted in the mandate the Government received.

He also commended the Government on its handling of the pandemic and said the Korean Government would be providing tangible support to Sri Lanka in coping with the COVID-19 crisis.

The two delegations have discussed a number of priorities for further cooperation between Sri Lanka and Korea that included FDIs, exports, tourism and migrant workers.

Noting that the Korean Prime Minister is keen on visiting Sri Lanka, Ambassador Jeong said, “We are and will always be close friends.”