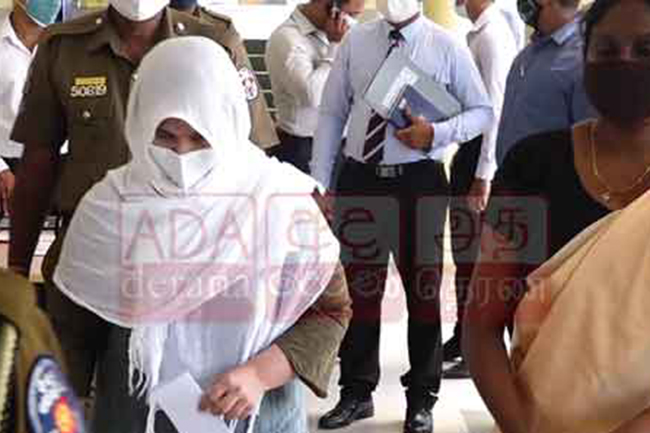 Abdul Cader Fatima Saadiah was brought to the Commission for the second consecutive day on Friday (23), however, evidence hearing was carried out without the presence of media personnel.

When Fatima Saadiah was produced before PCoI panel on Thursday (22) for the first time, questions were raised over the recording of evidence from her, due to concerns that it could complicate ongoing legal proceedings against her.

Thereby, no statements were recorded from the National Thowheed Jamaath (NTJ) leader’s wife on Thursday. The Commission had stated that it would deliberate on the issue and announce its final decision on whether her testimony would be recorded in due course.

Fatima Saadiah was detained by the Criminal Investigation Department (CID) under the Prevention of Terrorism Act (PTA) following the encounter between the security forces and the remaining members of Zahran’s extremist militant group at a safehouse in Sainthamaruthu, Kalmunai on the 26th of April 2019.

As the detention order against her had expired, Fatima Saadiah was produced before the Fort Magistrate’s Court and remanded her until the 4th of November.

However, the magistrate ordered to produce the suspect before Presidential Commission on Friday.

Subsequently, the prisons officials had brought her to the PCoI office at BMICH yesterday and its panel proceeded with recording evidence from the suspect for 13 hours.

Fatima Saadiah had left the PCoI premises at around 12.40 am today, amidst the security of prison officials.