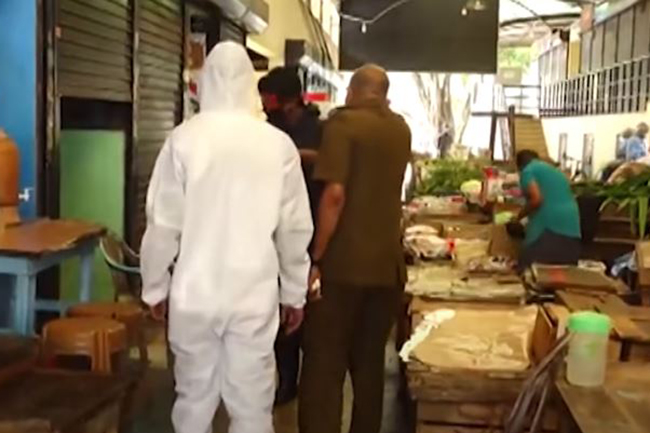 The weekly fair in Nugegoda was temporarily closed for the public today (24) following the detection of Covid-19 infections.

It is reported that two fish vendors at the marketplace have contracted the novel coronavirus.

The marketplace was disinfected following the new development, Dr. Manoj Rodrigo, the Chief Medical Officer of Health at the Kotte Municipal Council said.

Meanwhile, District Base Hospital Rikillagaskada halted its operations after it was confirmed that one of its doctors has been exposed to Covid-19.

The physician in question, a resident of Kelaniya area, has reportedly visited the Peliyagoda Fish Market recently. He was then referred to a PCR test which confirmed that he is positive for the virus.

It is also reported that a captain of Sri Lanka Army who visited the Peliyagoda Fish Market not long ago is now novel coronavirus-positive.

Further, two assistants of the Covid-19 infected fish vendor identified from Weligama, Matara have also been exposed to the virus.

PCR tests were carried out on them while they were under self-isolation and they are now under medical care at the Hambantota District General Hospital.

In another development, Madampe fish market was shut down as a fish vendor from the area had contracted Covid-19.

The individual in question is reportedly a resident of Madampe area in Ratnapura and had been to the Peliyagoda Fish Market for trading.

According to reports, three contacts of the fish vendor from Muwagama, Ratnapura have been tested positive for the virus and were directed to the National Institute of Infectious Diseases (NIID) last night. They have been identified as residents of Karangoda, Malwala and Kiriella areas in Ratnapura District.