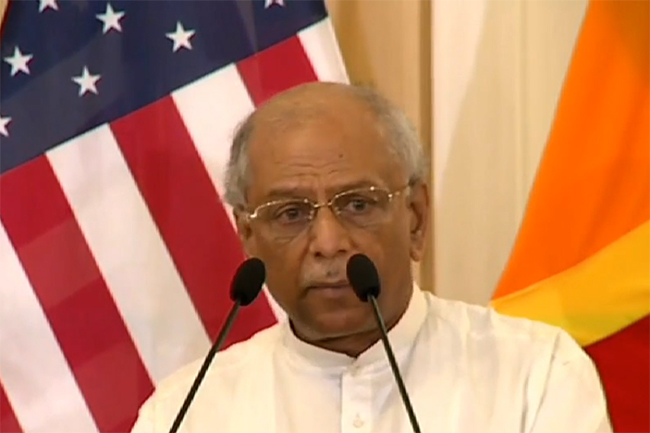 The remarks came during the joint press conference held by the Foreign Minister and his U.S. counterpart Michael R. Pompeo earlier today.

The U.S. Secretary of State arrived in Sri Lanka last night (27), upon completion of his official visit in India. He met with President Gotabaya Rajapaksa this morning.

Delivering his speech, Minister Gunawardena went on to say that Sri Lanka will be conscious of the opportunities and responsibilities that come with its strategic location.

“We see the importance of maintaining the freedom of navigation in our seas and air space and also protecting the sea lines of communication and undersea cables. We believe, all countries should adhere to and respect international law including the UN convention on the law of the sea.”

Speaking on the bilateral relations between the U.S. and Sri Lanka, the minister said the two nations have nurtured strong relations for over seven decades, founded on shared values of democracy and socio-economic orientation.

The relations between the people of the two countries go back as far as the mid-1800s, predating the formal establishment of diplomatic relations, he said, adding that over the years, these engagements have significantly matured into a multifaceted relationship covering political, economic, educational, cultural, defence affairs including maritime matters as well as equally important people-to-people interactions.

Thanking the U.S. State Secretary’s decision to visit the island nation amidst the formidable challenges presented by the Covid1-19 pandemic, the Foreign Minister told Pompeo, “Your wide-ranging discussions with President Gotabaya Rajapaksa and our own discussions have generated a renewed momentum to the conversation with key American interlocutors have had with Sri Lankan leaders over the past months this year.”

Minister Gunawardena, commenting on the two major electoral processes – the presidential and parliamentary elections – recently held in Sri Lanka, said, “these elections reflect the people’s mandate to safeguard the unitary state, sovereignty, territorial integrity, national security, economic progress, presenting a clear opportunity for all our friendly nations, especially the United States to join in our forward journey for a stable, secure country with economic advancement.”

The U.S. is one of Sri Lanka’s major development partners, with over USD 2 billion worth of development assistance in wide-ranging areas including agriculture, environment, natural resources, health, education, business development, trade and humanitarian assistance, he said further. “The U.S. remains Sri Lanka’s largest single markets with exports of USD 3.1 billion in 2019 and even the present context of Covid-19 related market downturn remains in a smaller position with USD 1.1 billion for the first half of this year.”

“The U.S. has been a friend and assisting Sri Lanka in times of difficulty and we remain deeply grateful for your support,” he went on to say.

The Foreign Minister expressed his gratitude to the United States for extending assistance to Sri Lanka following the tsunami disaster in 2004. He also recalled the assistance rendered by north American country in the aftermath of the Easter Sunday terrorist attacks on April 21, 2019, as well as during Covid-19 outbreak.

“I also extend my sincere thanks and appreciation once again for proscribing the LTTE terrorist organization even before the 9/11 attack and up to now.”

The Foreign Minister noted that today’s two-way discussions are a continuation of interactions with President Gotabaya Rajapaksa with key US interlocutors, the dialogue which took place virtually between and himself and Secretary Pompeo several months ago. He said it was an opportunity for both sides to understand each other’s priorities, share insights and consider steps to further elevating bilateral engagement on agreed areas of cooperation.

“In furtherance of making the bilateral relations more robust, we have agreed to convene the next sessions of US-Sri Lanka partnership dialogue in early 2021,” the Foreign Minister added. “Progress on several areas including economic, defence and research through intensified coordination. Next sessions of the joint council for the Trade and Investment Framework Agreement will also be convened on the earliest possible timeframe.”

Minister Gunawardena added that it was also considered opportune to broaden the bilateral engagement, in areas such as ICT, cybersecurity, agriculture, science-technology, innovations, trade & investments, business and climate change.