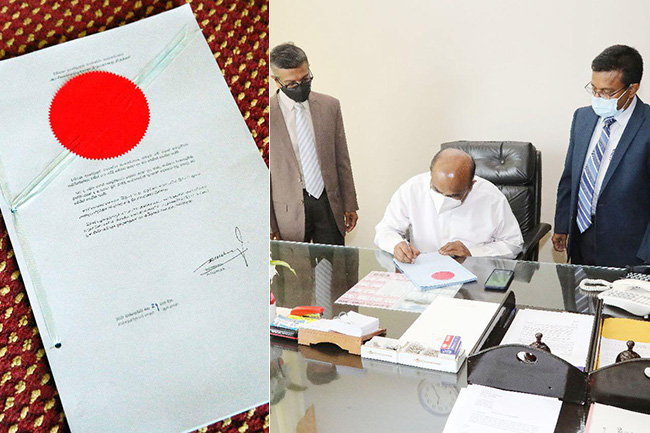 Speaker of Parliament Mahinda Yapa Abeywardena has assented the draft bill of the 20th Amendment to the Constitution today (29).

Speaker Mahinda Yapa Abeywardane has put his signature validating the 20th Amendment to the Constitution which was passed in Parliament with 2/3 majority on October 22nd, the Parliament’s Department of Communication said.

The Speaker signed the blueprint of the constitutional amendment at around 11.30 am this morning, the Secretary-General of Parliament Dhammika Dasanayake said.

The Deputy Secretary-General and the Chief of Staff Neil Iddawala were also present during the event.

Thereby the 20th amendment to the constitution will be implemented in full from today (29).

The new constitutional amendment will now be considered as the law of the country with immediate effect, Chief of Staff and Deputy Secretary-General of Parliament Neil Iddawela stated.

Hence, the existence of Constitutional Council has been abolished forthwith, he said adding that all provisions of the Act (Law) will now be in operation.

The 20th Amendment was passed with a two-thirds majority in parliament on October 22, as 156 legislators voted in favour of the constitutional amendment while 65 MPs voted against.

SJB MPs Dayana Gamage, Ishaq Rahuman, M. Raheem, Ahamed Nasir, Mohomed Harris, Faisal Cassim, Aravind Kumar and M.S. Thowfeek had voted in favour of the draft bill, much to the surprise of many.

Former President and current SLPP Parliamentarian Maithripala Sirisena was absent during the vote.

Apart from the abolishment of Constitutional Council, several other major constitutional changes including the following will take place with the introduction of the new amendment.

Under the observation of Parliament, the President possesses the power to appoint the Chief Justice Justices to the Supreme Court, President of Court of Appeal and its judges, the Attorney General, the Inspector General of Police, the Auditor General and the Ombudsman.

The President also possesses the power to hold a ministerial post under his purview.

The number of Election Commission members has been revised to 05 and the President is given the power to appoint members of the election body as well as its chairman.

The Constitutional Council will be abolished and instead the Parliamentary Council has been introduced.

Being a dual citizen will no longer serve as a disqualification to run for the Presidency or contest a parliamentary election as the barrier was removed by the newly-passed amendment.

The power to appoint the Heads of Departments is now vested with the Cabinet.

Through the 20th Amendment, the number of Supreme Court judge has been increased from 11 to 17 while the number of Court of Appeal justices was raised from 12 to 20.