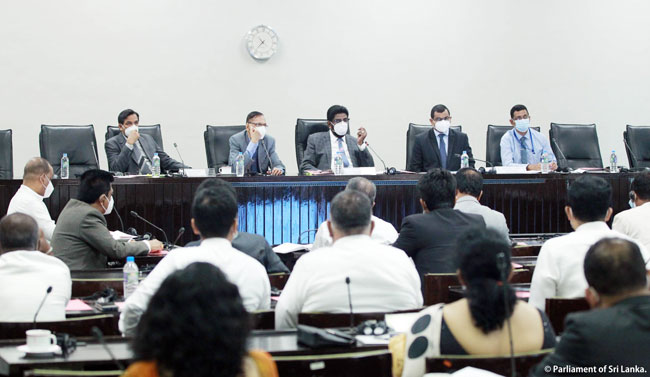 Website regulatory process to be implemented within two weeks  Keheliya

Minister of Mass Media Keheliya Rambukwella stated that a proper mechanism for the regulation of websites is needed and will be implemented within the next two weeks.

He stated this while attending the Ministerial Consultative Committee on Mass Media held on 21st November, a statement said today.

MP Suren Raghavan commenting on the matter stated that attempts to incite racism through social media should be curbed. Adding to his remark, the Minister of Education Prof. G.L Peiris said that a new law has been passed in Singapore to control such matters and having studied such, the formulation of a new mechanism should be made.

Minister Keheliya Rambukwella stressed that the Press Council Act should be amended in a way that it would protect the dignity of the citizens. He also said that the rights of all citizens should be protected by the media. The Minister also pointed out that defamation which is unjust should have control and that media regulation is required.

Speaking at the event, MP Prof. Charitha Herath, said that having discussed the amendments to the Press Council Act at the Ministerial Consultative Committee on Mass Media would make its progress more convenient. He also said that a proper mechanism should be formulated to regulate television and radio broadcasts as well.

The Minister of Education Prof. G.L Peiris stated that it is convenient to refer the relevant amendments to the legal Drafting Committee after having it referred by the Ministerial Consultative Committee. The Professor highlighted the importance of referring a Bill to a technical committee.

MP Manusha Nanayakkara emphasized the need to reactivate the self-regulatory system for media institutions, which was discussed in 2015. He further emphasized that the damage done to civilians by the media was immense.

Discussions were also held regarding resuming the telecast of Parliamentary sessions through Channel eye of the Sri Lanka Rupavahini Corporation. The Committee also focused on the recognition of media persons as professionals, the establishment of a minimum wage scheme for journalists, allocation of graduates in Mass Communication to related vacancies, and regarding the appointment of teachers to schools for the purpose of teaching Mass Media as a subject.

MP Shantha Bandara, drew the attention of the Committee towards the standardization of state channels. Minister Keheliya Rambukwella pointed out that 06 chairmen’s have been appointed to the Independent Television Network (ITN) during the last four years. In addition, the Minister stated that state media institutions were running at a loss during the previous regime and that it will be restored to a profitable status within two years.

The Minister said that providing educational scholarships to journalists, providing media equipments at a concessionary rate along with multiple welfare activities will be implemented for journalists. He further said that the committee will not facilitate taking political decisions and will be take common decisions having consulted all parties.

MP Uddika Premarathna said that the standards of the language used for news should be looked into whilst pointing out that a mechanism should be implemented on that regard.

Secretary to the Ministry of Mass Media Mr. Jagath P.  Wijeweera informed the Committee that an insurance scheme for journalists is scheduled to be introduced along with the establishment of a journalism college in the coming year paving way for the education in ethical journalism.

MP Selvarajah Kajendran, highlighting threats faced by journalists in the Northern and Eastern Provinces, requested the Chairperson to intervene in controlling such situations. The minister directed to have the Ministry and the IGP informed during such situations with immediate effect.

The Committee also focused on the vacancies in the Postal Department and having the distribution areas redefined. Postmaster General Mr. Ranjith Ariyaratne said that a program to renovate sub post offices is scheduled to be launched next year. Making the substitutes permanent will be taken into consideration in the future, he added.