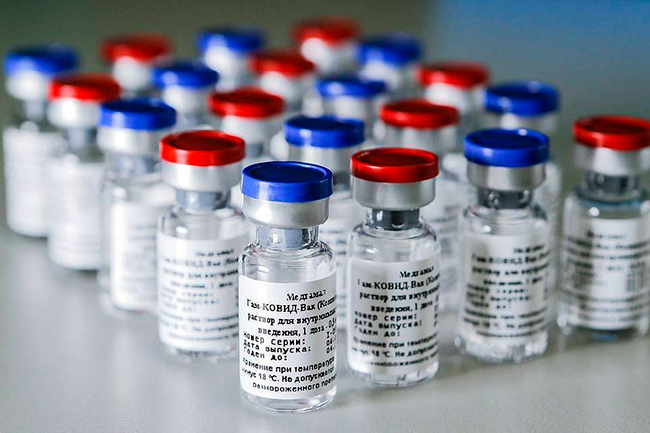 Russia said Tuesday its Sputnik V coronavirus vaccine was 95 percent effective and would be cheaper and easier to store than some alternatives, as the global race heats up to develop a jab.

The announcement was the latest in a flurry of breakthroughs as several vaccine makers worldwide published preliminary data showing efficacy rates of 90 percent and higher.

Countries are hoping to begin inoculating their populations by year’s end or in early 2021 to stop a pandemic that has claimed the lives of nearly 1.4 million people.

Russia was one of the first to announce the development of a vaccine in August -- dubbed Sputnik V after the Soviet-era satellite -- but before the start of final clinical trials.

In a statement on Tuesday, the vaccine’s developers said preliminary data after trials involving thousands of volunteers showed “an efficacy of the vaccine above 95 percent” after a second dose.

Russia’s health ministry, the state-run Gamaleya research centre and the Russian Direct Investment Fund (RDIF) said in the statement they expected the vaccine to record an even higher effectiveness after the next analysis.

“No unexpected adverse events were identified as part of the research,” it said, though some of those vaccinated suffered short-term effects including fever, weakness, fatigue, and headache.

The two-dose vaccine will be available on international markets for less than $10 (8.40 euros) per dose, they said, and will be free for Russian citizens.

It can be stored at between two and eight degrees Celsius (between 35.6 and 46.4 degrees Fahrenheit), they said, instead of the temperatures far below freezing required for some other vaccines.

Western experts have in the past expressed concern over Russia’s vaccine, fearing that its development could be rushed.

“The lack of any serious adverse events in approximately 20,000 trial participants is also very encouraging,” she said.

Russia has applied to the World Health Organization for accelerated registration and pre-qualification of the Sputnik V vaccine.

Russia in recent weeks has registered a steep increase in new coronavirus infections but has stopped short of introducing strict measures like some European countries.

The country’s total infections on Tuesday stood at 2.14 million, the fifth-highest caseload in the world.

But at 37,031, virus deaths are significantly lower than other badly hit countries, raising concerns that the authorities are downplaying the pandemic’s severity.

Data published by Russia’s federal statistics service earlier this month indicated excess deaths of more than 117,000 year-on-year between March and September, suggesting that virus fatalities could be much higher.

While Moscow remains the epicentre of Russia’s outbreak, the country’s poorly funded regions are taking the brunt of the second wave.

Deputy Prime Minister Tatiana Golikova on Tuesday said that in six of Russia’s 85 regions, over 90 percent of hospital beds dedicated to Covid-19 patients were occupied.

Russia hopes to avoid a second nationwide lockdown by accelerating the production of vaccines.

Putin has dismissed talk of another lockdown and emphasised last week that vaccines are on their way despite voicing concern over the country’s “alarming” case totals and fatality rate.

He last month announced that Russia had registered a second coronavirus vaccine, EpiVacCorona.

Kremlin spokesman Dmitry Peskov on Tuesday said that Putin -- who has said that one of his daughters took part in the Sputnik V clinical trials -- could not volunteer to take the vaccine as “head of state”.