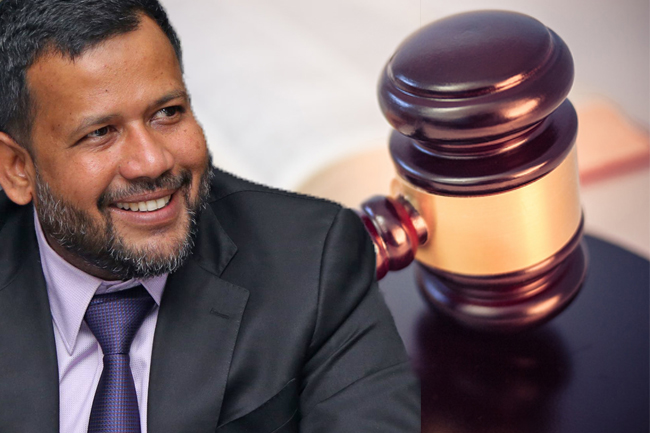 Parliamentarian Rishad Bathiudeen, who was remanded over the alleged misuse of buses belonging to the state-owned Sri Lanka Transport Board (SLTB) during the presidential election last year, has been granted bail.

The case was taken up before Colombo Fort Magistrate’s Court earlier today.

Accordingly, the former minister of trade was released on two personal bails, each worth Rs 1 million and a cash bail of Rs 100,000.

The magistrate further imposed an overseas travel ban on MP Bathiudeen and gave orders to inform the Controller-General of Immigration and Emigration in this regard. He also ordered the parliamentarian to hand over his passport to the custody of the court.

MP Bathiudeen is accused of misusing 222 buses owned by the SLTB for transporting internally displaced persons (IDPs) from Puttalam to polling stations in Silavathurai, Mannar during the 2019 Presidential Election, along with project director Mohamed Yaseen Samsudeen and project accountant Alagarathnam Manoranjan.

The suspects have allegedly violated Article 82(1) of Presidential Elections Act, No. 15 of 1981 by misappropriating public funds to the tune of Rs. 9.5 million.

Colombo Fort magistrate, taking into account the submissions of the defense raising concerns regarding the risks of Covid-19 infection at the Magazine Prison, decided to grant bail to the former minister.

However, the third suspect Alagarathnam Manoranjan was re-remanded until the 30th of December.

The magistrate stated that the Defense Ministry’s website has mentioned the prisons are overcrowded, adding that even a suspect charged under the Public Property Act can be treated as a special case in the event of a pandemic situation.

The defense attorneys, citing lengthy verdicts from Australia and Canada, pointed out that their client must be granted bail as the prison where he is held is exposed to Covid-19. They went on to noted that MP Bathiudeen has been under medication for diabetes and fatty liver disease for many years. They requested the court to consider the risks of virus infection and life-threatening complications to the client’s life as he suffers from chronic diseases.

The case will be taken up for hearing again on the 22nd of December.

Last month, the Criminal Investigation Department (CID), upon the direction of the Attorney General, had sought the Colombo Fort Magistrate to issue a warrant to arrest MP Bathiudeen and the other two suspects on charges of criminal misappropriation of public funds and violation of election laws.

On October 14, the Colombo Fort Magistrate issued a travel ban on the parliamentarian after taking into account a request made by the CID.

MP Bathiudeen was subsequently arrested at a housing complex located at Ebenezer Place in Dehiwala in the early hours of October 19.

He was then produced before the court and placed under remand custody. His bail application was also rejected by the magistrate’s court on several occasions.