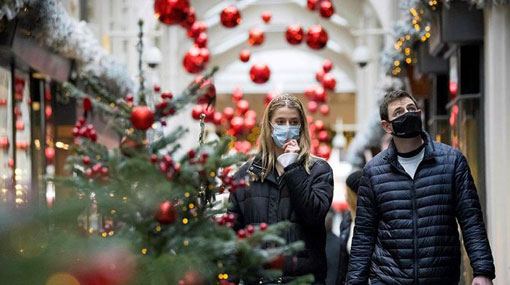 France and Britain to loosen COVID-19 lockdowns ahead of Christmas

Leaders in France and Britain on Tuesday announced tentative easings of lockdown restrictions heading into the Christmas holiday season while acknowledging that the coronavirus was far from under control.

The decision to reopen shops, resume indoor entertainment, and allow limited holiday gatherings appeared to rub up against a consensus among scientists, who have underscored the risks of indoor socializing and have warned of the danger in lifting restrictions too rapidly. But many European leaders seem reluctant to keep their economies closed or to stand in the way of family members seeing each other after a year marked by long periods of strict confinement measures and social isolation.

French President Emmanuel Macron began a national address Tuesday by outlining what restrictions would remain in place in the coming weeks: “We will have to continue to stay at home, to telecommute when possible, to give up private meetings, family gatherings, and all nonessential travel.”

But he outlined a three-step deconfinement plan under which nonessential shops could reopen starting Saturday and cinemas and theaters could welcome back audiences in mid-December. Restaurants would need to remain closed into January, he said, and an evening curfew would remain in place. But exceptions would be granted for Christmas Eve and New Year’s Eve so that people could “share these moments together among family,” Macron said.

Vaccination, he added, would begin in late December or early January and would not be mandatory.

In Britain, Prime Minister Boris Johnson has announced plans for the national lockdown to end Dec. 2, to be replaced by a region-by-region tiered system of restrictions.

For those areas placed in the highest tier, restaurants and pubs will be required to close except for takeaway service. But in many places, shops, gym and salons would be allowed to reopen, and indoor and outdoor spectator sports could resume.

On Tuesday, the four nations of the United Kingdom — England, Scotland, Wales and Northern Ireland — also agreed to an easing of restrictions that would allow loved ones to meet during the Christmas period. From Dec. 23 to Dec. 27, up to three households can form a “Christmas bubble” and mix indoors. During those few days, Britons will be able to travel across the country and move between tiers.

Cabinet Office Minister Michael Gove told Sky News on Tuesday that families will have “something closer to a normal Christmas.”

In Spain, the government is reportedly considering limiting family and other social gatherings over the holidays to just six people, in addition to imposing a 1 a.m. curfew on Dec. 24 and Jan. 31.

According to the newspaper El País, the government’s draft document, titled “Proposals for covid-19 public health measures for the celebration of Christmas fiestas,” recommends socializing only with other members of the same household and limiting all outside contacts to six people.

Chancellor Angela Merkel is to meet with leaders of the country’s 16 federal states Wednesday to determine whether to extend a month-long November lockdown, which closed bars and ended eat-in dining but kept schools and stores open.

Draft proposals would extend restrictions but include the possibility of a week-long ease in contact restrictions over the Christmas week, allowing gatherings of up to 10 people and an unlimited number of children under age 14.

But behind the easing of restrictions are continued concerns over case numbers, hospitalizations and death tolls, which suggest Europe is barely past the peak of the second wave.

“We have slowed down the circulation of the virus, but it remains very present in France as in the entire Northern Hemisphere,” Macron said in his speech. “We must continue our efforts.”

In France, at least, the numbers have showed some sign of improvement after nearly a month of lockdown. On Tuesday, the Health Ministry recorded 9,155 new cases of coronavirus infections in the previous 24 hours but still a relatively high death toll of 458 in the same period, in keeping with totals recorded in previous weeks.

In comparison with the spring, France’s current occupancy of hospital intensive care units is similar to the level when the country loosened restrictions after the first wave of the novel coronavirus. As of Monday, the country reported 4,438 ICU cases of covid-19, the illness caused by the virus. On April 28, the day Macron announced plans to loosen measures, 4,307 ICU cases of covid-19 were recorded.

But France’s hospitals are more saturated now than they were the first time around: numbers have been declining for only a week, compared with two weeks of declines before the springtime loosening of restrictions, and there are 31,449 hospitalizations now, 14 percent more than in the spring.

In Britain, Tuesday’s announcement of loosened restrictions for the Christmas holidays came shortly after the government said the latest daily death toll was 608, the highest recorded since May.

And unlike in May, when Johnson announced the first easing of restrictions after four weeks of emptying hospitals, numbers still are rising. There were 13,767 covid patients in British hospitals on Monday, the most since April 22 and double what they were a month ago. ICU occupancy is still rising. The only small comfort is that the rate at which hospitals are filling may have started slowing in the past week.

Macron warned citizens that if the government’s public health guidelines were not followed, the virus could well return. He cautioned against overconfidence despite the brief respite of the holiday season.

“There are always a lot of uncertainties, and we have to keep a lot of humility in this matter. This virus has taught us that,” he said.