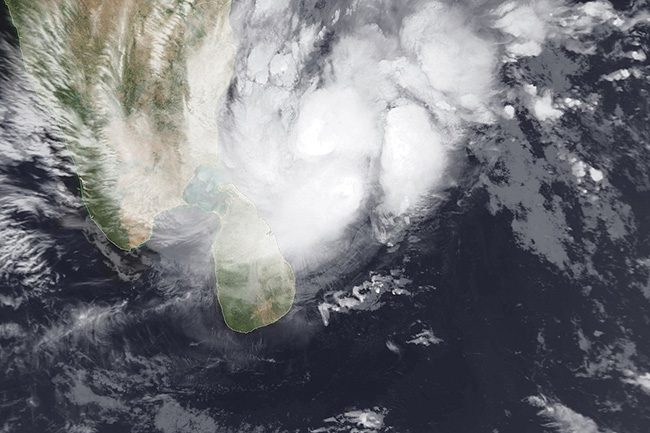 Impact of Cyclone Nivar on the island expected to decrease gradually

The Severe Cyclonic Storm ‘Nivar’ which was located over the southwest Bay of Bengal has made landfall off the coast Tamil Nadu of India, moves north-westwards and gradually weakening, the Department of Meteorology says.

The influence on the weather over the island from this cyclonic storm will be gradually reduced.

Several spells of showers will occur in North-western, Western and Sabaragamuwa provinces and in Jaffna, Mannar, Galle and Matara districts.

Showers or thundershowers may occur at a few places in Uva province and in Ampara and Batticaloa districts after 2.00 p.m.

Winds will be south-westerly to southerly in the sea areas around the island and the wind speed will be (20-30) kmph.

Wind speed can increase up to (40-50) kmph in the sea areas off the coasts extending from   Puttalam to Trincomalee via Mannar and Kankesanturai.

The sea areas off the coasts extending from Puttalam to Trincomalee via Mannar and Kankesanturai can be fairly rough at times. Other sea areas around the island will be moderate.