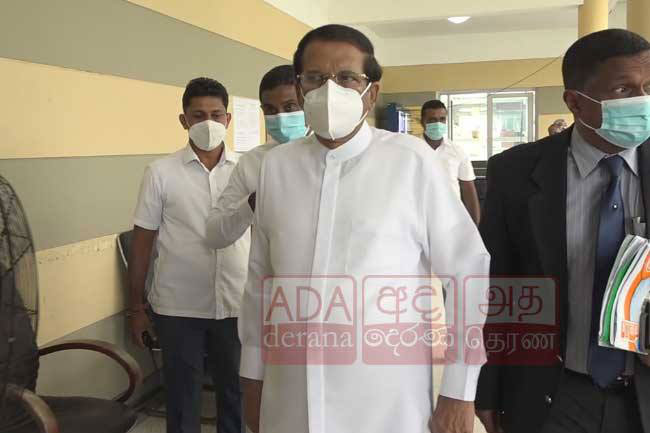 Maithripala accused of attempting to shift blame at PCoI

Former President Maithripala Sirisena was accused of attempting to shift blame, as well as key decision-making responsibilities, to save himself, and for his selective memory of events in the days leading up to the Easter attacks.

During the cross-examination, the President’s Counsel Anura Meddegoda, representing former IGP Pujith Jayasundara, questioned the former President about why he chose to arrive back in the country on his originally planned flight when there were 03 earlier flights available.

The former President replied, “As a President, I do not know flight times and schedules. I only stick to the times given to me by my officials and I simply turn up as expected.

The other issue was that my physician in Singapore had just administered an injection to me, and advised me not to fly for a 24-hour period. Despite this, I risked my own health and arrived back at midnight.”

Following this, the cross-examination continued, this time led by the legal representative for the former Defense Secretary Hemasiri Fernando, Attorney-at-Law Dilshan Jayasuriya.

The Attorney first asked the witness “Did you visit the Tirupati Temple in India, on the 16th of April, before flying to Singapore?” In response, the former President replied that this was an annual pilgrimage.

The former President replied, “With the blessings of the Triple Gem and the gods, I was not in discomfort at that time.”

The Attorney then asked him, “Were you accompanied by on the 16th by your spouse and the three children?” The former Head of State responded saying that recall if all three of his children went with him at the time.

To this, the attorney stated, “This is not a joke. The country’s President was on a personal jaunt, at a time the country’s national security was being threatened. Are you expecting me to accept that you, who recalled that IGP Pujith Jayasundara boarding the flight and saluting you on that day, can’t recall which of your own children accompanied you?”

He began by saying, “I would like to suggest to you that incidents such as the Mawanella Buddha statue vandalism, and the killing of police personnel in Vavunathivu, happened due to the confusion created in the country by the constitutional crisis you created in October 2018.”

The former President replied, “I do not accept that. That wasn’t a decision I took on my own. There were President’s Counsels, academics, and many others who were involved in drafting gazettes.”

The attorney then asked him, “Are you now trying to shift the responsibility for decision making to someone else?”

He replied, “No. To this day, I still believe that my decision was the right one.”

The former President was then asked, “You held a DIG’s meeting on April 08, 2019. When SIS Chief Nilantha Jayawardena came for that meeting, he was already in possession of the Indian intelligence warning which he received on April 04. Isn’t his failure to inform you of this warning at that time, a serious dereliction of duty?”

He responded, “You can’t call that a dereliction of duty. I am reluctant to blame just one person for not preventing the attacks and for not informing me.”

Then-Attorney then asked the witness, “If that is the case, then isn’t the imprisonment of former Defense Secretary Hemasiri Fernando and former IGP Pujith Jayasundara unfair?”

The former President responded, “Yes, it could be.”

The attorney then asked him, “If you believed it to be unfair, then why did you say that they must be held responsible for this even before the Malagoda Commission report was released?”

The ex-President stated, “I only stated as such based on what was discussed at the National Security Council meetings.”

To this, the attorney stated, “I am of the opinion that the reason you do not blame the former Director of State Intelligence for this incident, is because he did inform you of the warning the day before you went abroad, as well as the day before, and on the day of the attacks. Further, I reiterate that you are trying to absolve yourself of responsibility for this incident by not holding him accountable.”

The former President said, “I completely reject that allegation. If I knew of the warning I would have never left the country without making necessary arrangements.”

The ex-President was then asked, “If an investigation into this proves that you had in fact known of this and failed to take action, would it be only fair for action to be taken against you?”

He replied, “No, it wouldn’t be unfair if that is proven.”