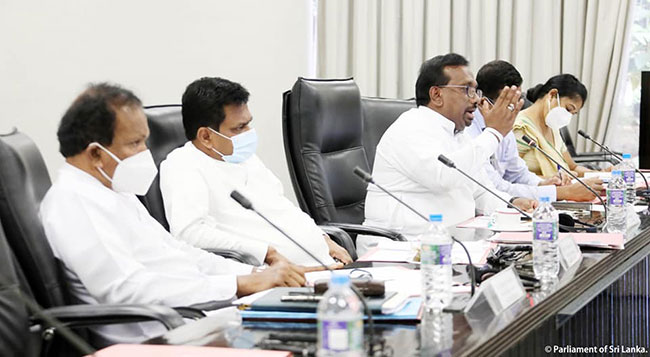 From the next season, 1000 kg of paddy per hectare will be purchased at a guaranteed price of Rs. 50 from every farmer who receives the fertilizer subsidy, the Minister of Agriculture Mahindananda Aluthgamage said.

The Minister said that Rs. 100 million has been allocated to the Paddy Marketing Board to restore the storage complexes in order to carry out paddy storage process efficiently and safely.

Addressing the Ministerial Consultative Committee on Agriculture in Parliament on Tuesday (24) the minister emphasized that steps will be taken to eradicate the existing monopoly on paddy and keep the price of paddy under control.

Minister of Labor Nimal Siripala de Silva, who participated in the Consultative Committee, pointed out that most of the harvest is destroyed due to damage caused by intermediate stages such as transportation as well as wildlife and due to this the farmers in certain areas are reluctant to engage in farming activities.

Speaking at the committee, Minister Aluthgamage further said that discussions are being held with the Wildlife Department on this issue and it is expected to take immediate action with a scientific approach.

It has been revealed that chemical fertilizers are increasingly used in agriculture in Sri Lanka, causing many health and environmental damage. Minister of Agriculture stated that in order to control this situation, soil testing kits will be provided to all Agrarian Service Centers and fertilizers will be issued only according to the soil conditions in the area.

In order to facilitate farming activities, a mechanical section consisting of backhoes, tractors, mowers etc. will be established in each Agrarian Service Center and practical training programs on the use of relevant equipment will also be implemented the minister said.

The Minister of Agriculture emphasized that a database covering the entire island will be compiled containing agricultural information, which will include all information related to crop cultivation at provincial and district levels according to various climatic and environmental conditions. It was also stated that the farmers will be updated by the regional officials on all the relevant information to facilitate the cultivation activities through the database.

Discussions were also held on reclamation of paddy fields, restoration of economic centers, restoration of Agrarian Service Centers, making new recruitments as required and distribution of fertilizer at district level.