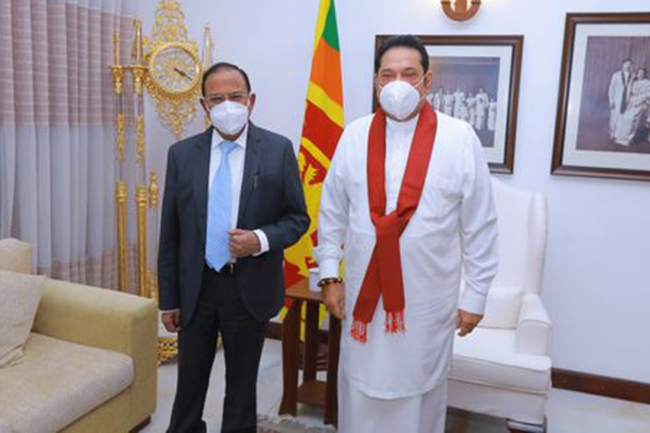 The Indian NSA has highlighted that due to the Covid-19 pandemic, many countries in the region had to face similar economic and social problems. However, economic revival and governance must continue in order to overcome the obstacles of this pandemic.

He stated that despite the Covid-19 epidemic, a lot of diplomatic deliberations have been held virtually on the development of bilateral relations and foreign affairs between leaders.

Mr Doval further exclaimed that a lot of immigrant workers, both in Sri Lanka and India have lost their jobs as a result of the pandemic and this has reduced the inflow of foreign currency.

However, notwithstanding the fact that the economy needs to be strengthened in the face of the Covid-19 pandemic, strategies to promote economic growth and development are also being pursued by small countries in the region.

The Indian NSA assured that the government of India would extend its full support in reviving both nations and that despite the Covid-19 situation, development in the region, including Sri Lanka and India, should be prioritized.

PM Rajapaksa stated that housing projects have been implemented in the north-east and upcountry areas with the assistance of the government of India and requested neighbouring nation to commence such housing projects with a clear approach.

Mr Doval reassured the Indian government’s utmost support in this regard.

Under the guidance of Indian PM Narendra Modi, it was agreed at this meeting to adopt modern technology and to focus on drinking water supply projects initiated in India and to adopt such technology in Sri Lanka.