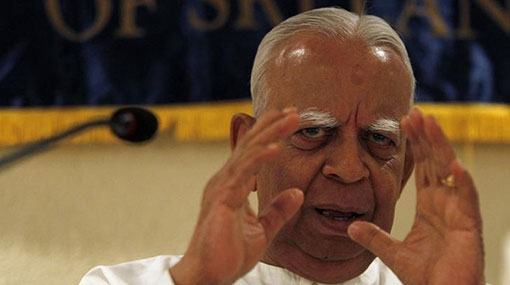 In an apparent last-minute addition to his two-day itinerary in Colombo, India’s National Security Adviser Ajit Doval met senior Sri Lankan Tamil leader R. Sampanthan on Sunday, before wrapping up his visit for a trilateral discussion on maritime cooperation and security.

While the Indian High Commission had tweeted updates of Mr. Doval’s visit including his arrival, departure and various meetings during his stay — the trilateral talks with Sri Lankan and Maldivian counterparts, bilateral meetings with President Gotabaya Rajapaksa, Prime Minister Mahinda Rajapaksa, Maldivian Defence Minister Mariya Ahmed Didi and Secretary to Sri Lanka’s Ministry of Defence Kamal Gunaratne — the official handle, until Sunday night, had no mention of the NSA’s meeting with Mr. Sampanthan.

It remains unclear if a political solution to Sri Lanka’s long-pending Tamil question or the prospect of a constitutional settlement was discussed. However, the meeting with Mr. Sampanthan, whose Tamil National Alliance has 10 MPs in the 225-member legislature, assumes significance coming two months after Prime Minister Narendra Modi highlighted India’s concerns about the rights of the Tamil minorities, in a virtual summit with his Sri Lankan counterpart.

A joint statement issued by New Delhi and Colombo at that time said: “Prime Minister Modi called on the Government of Sri Lanka to address the aspirations of the Tamil people for equality, justice, peace and respect within a united Sri Lanka, including by carrying forward the process of reconciliation with the implementation of the 13Amendment to the Constitution.”

The Rajapaksa administration has promised to draft a new Constitution, but some prominent members in the government openly oppose the Amendment and the provincial council system consequent to the Indo-Lanka Accord of 1987. The TNA has urged the government to build on the considerable drafting work done during the former government’s time in a process that involved all political parties including Mr. Rajapaksa’s.