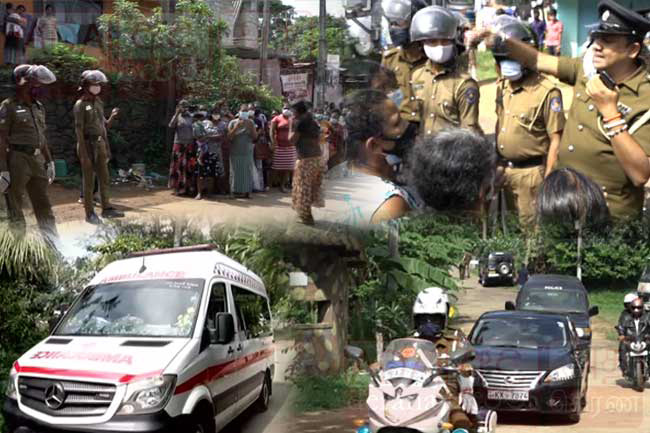 The protesting inmates at the Mahara Prison have broken into the medical section of the facility amidst the riot, says the Department of Prisons.

Commissioner of Prisons Administration/Rehabilitation and Skills Development Chandana Ekanayake said they had consumed several varieties of stored drugs in the medical section.

Addressing a press conference today (01), he noted that the inmates had caused massive property damage while raging through the prison premises.

Nearly 2,750 inmates are held at the Mahara Prison and approximately 1,600 of them are remanded inmates, Mr Ekanayake stated further.

Explaining the incident, he said these remanded inmates had broken out of the dining area during the mealtime and staged a protest at the front gate of the prison on Sunday (29), demanding to be referred to PCR tests.

When the prison superintendent and other officials had attempted to allay the situation, the protesting inmates had started to attack them, Mr Ekanayake continued. They had then made an attempt to escape the prison premises, prompting the officials to use force to bring the situation under control.

They have also broken into the prison’s medical section and consumed the stored pharmaceuticals including the ones used to treat mental illnesses, Mr Ekanayake added.

He went on to say that the conduct of the protesting inmates became more violent as a result.

A separate committee has been appointed to assess the damages caused by the inmates during the riot, he added.

Police Spokesperson DIG Ajith Rohana, addressing the media briefing, said the inmates who were convicted of narcotics-related charges, had instigated the riot.

He stated that nearly 21,000 pills used for mental illnesses and sedation were stored at the prison’s medical facility at the time and a separate investigation has been launched into the large storage of pills at the infirmary.

Meanwhile, 187 inmates of Mahara Prison have been moved to the Colombo Remand Prison, he added.

Preliminary investigations have revealed that a medical officer attached to the Mahara Prison is linked to the unrest, the DIG went on to reveal.

In the meantime, the death toll from the incident escalated to 09 earlier today (01), after another inmate, who was hospitalized following the unrest succumbed to injuries.

A spokesperson of the Colombo North Teaching Hospital in Ragama stated that 108 including 02 prison officials who sustained injuries during the riot are under currently under medical care.